Scenes from a Wedding

We attended my cousin’s wedding in Minneapolis this past weekend. It was wonderful spending time with family, and there were lots of laughs. But I have to say, the big surprise—to everyone, really—was how fantastic a dancer my brother is. The rest of us have one or two fallback moves and can demonstrate our coordination well enough not to attract unsolicited pointing and laughing from the crowd. (Well, most of us.) But my brother? It was like discovering your sibling had won the televised Pillsbury Bake-Off and not told anyone. Had secretly been working for the CIA. Had one day awakened to discover he could read minds. “Oh this goofy trick? Yeah, it’s crazy! I don’t know how it happened.”

How had my brother become so talented? Where did he learn these moves? There were several possibilities:
Other relatives reacted to this display of dance magic by rejecting and blaming the music. At one point, my mother, tired of attempting to synchronize the waving of arms and pointing of fingers and shaking of hips, leaned over to me and said with some frustration, “I just don’t understand this music.”

My aunt decided to confront the music at its point of origin, wandering over to the DJ and blasting her with, “Your music sucks!”

And after watching my uncle do a Very Special Dance with a lone chair in the middle of the dance floor to Tina Turner’s “Private Dancer,” I have to say I agreed. Note here that he also demonstrated the best way to clear the dance floor for your own private dance: with a well-timed, well-cured fart. As the herd of guests migrated past, sour looks on their faces, some plugging their noses, I overheard one girl announce in a voice dripping with disgust, “It smells like poopee!” After the dance he ambled by and told us he was going to “Clear the other side of the room.”

Oh! This was fun, too: Later another of my aunts accidentally sat for a spell on a large, real rat trap near our table at a British pub (“Danger! Poison!”)

We returned on Sunday, and I was delighted to discover I’d been summoned to jury duty again in two weeks. Wheeee!

I’ll be blogging at the brand new Girlfriend’s Book Club on Thursday, September 2nd—there is a new post by a terrific author every day, so add this one to your list of daily reads.

PS: if anyone wants to buy my house, it’s still for sale. I’ll cut you a deal. 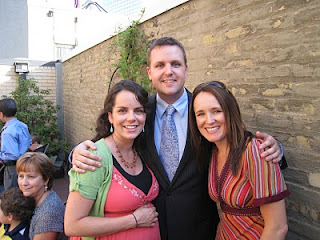 Me with my genetically gifted siblings. Wow, I have terrible posture. Either that or my brother's arm weighs a TON.