Congratulations to Bonnie, who won a signed copy of Brenda Janowitz's Recipe for a Happy Life! Let's keep the party rolling with more recipe-related reads: Today, I'm so thrilled to present Dana Bate, whose first novel The Girls' Guide to Love and Supper Clubs released this past February. This is an absolutely adorable book, so clever and funny. She and I share an acquiring debut editor, Jill Schwartzman, who obviously has excellent taste. Dana is giving away one signed paperback copy to a lucky reader--I'll pick a commenter at random this Friday at midnight. Leave a comment with your email address to win!

1. Tell us about The Girls' Guide to Love and Supper Clubs--where did you get the idea?
The book is about a twenty-six-year old woman named Hannah Sugarman who is having a quarter-life crisis. On paper, she seems to have it all: impressive job, brilliant boyfriend, famous intellectual parents. But all Hannah cares about is cooking, and unfortunately, no one takes her passion seriously. So when her relationship falls apart, she decides to start an underground supper club out of her new landlord's town house – a secret venture that is both wildly successful and highly problematic, given that it isn’t exactly legal. Suffice it to say, not everything goes as planned.

The idea came to me after I’d quit my job and moved to London with my husband for a few months while he worked on a project there. I had been toying with various ideas for a novel, when one morning I came across an article online about a woman called MsMarmitelover who hosted a secret supper club out of her London flat. Total strangers would come from all over and pay to eat her food, even though the whole operation wasn’t technically legal. I thought the idea sounded really fun – and risky – and that sort of became the launching pad for my novel.

2. Were there any things about the publishing world that surprised you?
Oh, boy. Lots. I was definitely surprised at how slowly the publishing machine operates. I sold my debut in late June/early July 2011, and it didn't come out until February 2013! Apparently that's fairly standard, and the long lead time allows them to create an implement a publicity plan, but in the digital era it definitely feels very slow. I also didn't fully appreciate how much of the packaging and marketing would be out of my control. My original title was THE DUPONT CIRCLE SUPPER CLUB, but my publisher changed it to THE GIRLS' GUIDE TO LOVE AND SUPPER CLUBS because they felt the original title was too DC-centric. And the cover, while delicious and adorable, is a bit pinker than what I'd envisioned. But I'm not a marketing or PR specialist, so understandably I didn't get to make the final decision on those things. That's why publicity and marketing departments exist!

3. What teenage memory makes you cringe?
Just one? Because I'll be honest with you: there are many. Several involve extremely questionable hairstyles and makeup choices. But one particular doozy of a memory involves a guy I briefly dated in the summer between high school and college. His friends called him "Mole Man" because he kind of looked like a mole, and the only reason I dated him was because when I met him, he told me I looked like a movie star (I do not). But who doesn't like a little flattery now and again? Frankly, after being the nerdy A student for so many years, I was thrilled to have a guy notice me. But he wasn't the sharpest knife in the drawer, and after we had a heated debate over whether or not the government had shot down JFK Jr.'s plane (he believed they had), I realized I had made a huge mistake. That I dated him almost the entire summer based mostly on his interest in me is not something I'm proud of.

4.Do you have any advice for aspiring authors?
Write the book you want to write. Don't worry whether that book will make the New York Times Bestseller list or whether your friends or family will enjoy it. Write the book that ignites the fire in your belly and makes you excited to get words on the page. Tune out the haters, and write what you love.

5. Your protagonist is an amazing cook; are you as well? What's your favorite recipe?
I love, love, love to cook. It is by far my favorite hobby. I have more cookbooks and recipe files than is probably necessary or recommended, so I'd be hard-pressed to choose a favorite recipe. But the carrot cake Hannah, my protagonist, mentions in THE GIRLS GUIDE TO LOVE AND SUPPER CLUBS is based on a real recipe, and it is *amazing.* I couldn't include it in the book for copyright reasons, but for anyone who is interested, you can find the recipe here: http://athomebysteveposes.wordpress.com/2010/05/16/commissary-carrot-cake-recipe/. It is divine.
~~~~~
Thank you so much, Dana! Isn't she terrific? Don't forget to include your email address when you leave your comment; as always, this is a spam-free zone, but I do need to know how to contact you should you win. (And you want to win this one, trust me.) 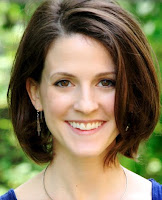 ~~~~~
Dana Bate is a freelance writer and former Washington producer and reporter for PBS's Nightly Business Report. She studied molecular biophysics and biochemistry at Yale University as an undergraduate and received her master's degree from Northwestern's Medill School of Journalism. She lives outside Philadelphia. THE GIRLS' GUIDE TO LOVE AND SUPPER CLUBS is her first novel.
Posted by Jess Riley at 1:48 PM