The floodwaters have receded here in east-central Wisconsin, and today the streets are mostly dry. However, the curbs are piled with water-logged carpeting, plaid sofas, and boxes of damp holiday decorations unfortunate enough to find themselves in basements across the city last week. As for me, this is yet another time that I thought, "Gee, sometimes it's good to have a crawl space unfit to store even a box of old roofing nails instead of a more luxurious basement in which I could store an old ping pong table."

Here's an animation of what's been happening in the midwest over the past two weeks. See all those scary-looking black triangles in Wisconsin, and how they kind of multiply like Gremlins by June 15? Yeah. Those freaky bastards are prolific. It's supposed to rain again tomorrow, so count on more of those sharp little buttplugs to pop up by the end of the week.

(Did I actually just type that? See what being overtired can do?)

The rain stopped long enough for us to meet up with some long-lost friends in Racine on Friday, where we were witness to an Elvis impersonator to shame every Elvis impersonator to ever don sequins and eat a sloppy sandwich. He sang, he shimmied, he draped sweat-soaked silk scarves over every single woman in the vicinity. (Did you enjoy all the alliteration? I promise I'll never do it again.) 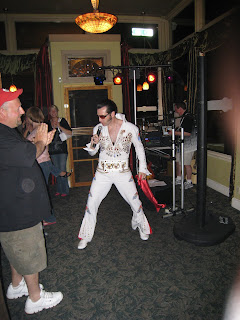 Today we celebrated Father's Day with J's family. We gave my awesome father-in-law the complete box set of Band of Brothers, and after the gift opening, we were all slightly horrified to discover that a pube had been shrink-wrapped against the metal tin container. A commemorative pube from Steven Spielberg, perhaps? (Or to steal my mother-in-law's joke, "Part of Tom's Hank.")

Don't you just love her?

Other events from the weekend included a 2 a.m. feeding frenzy at George Webb, a late-night viewing of the Tavis Smiley show on PBS (How do you know you're old? You're watching Tavis Smiley in your motel room after a night of drunken debauchery instead of leaving behind trace bits of DNA), and some drop-in stock signings of Driving Sideways in area bookstores. It was sold out at the Stevens Point Target, so I haven't officially seen it on Target shelves yet. (Though we did take photos of the bare shelf where it once was, as the label indicated.) I can't wait to see it in the Target down the street from me. I may pass out. I may crap my pants, accidentally knock over a display of men's underwear, and then pass out. It could be like the thimble-crashing scene from Mr. Show with Bob and David. Except it will be a rack of men's underwear I pull down with me. Not as funny as a decorative shelf full of thimbles, but that's how the store's laid out. Men's undies are right next to the books.

Okay, I'm going to sleep now before I write any more weird stuff.
Posted by Jess Riley at 11:56 PM