Not Just for Hippies and Libertarians

Yesterday I indulged my inner Off-the-Grid Homesteader when we attended the Midwest Renewable Energy Association fair. I'm not going to run off and join a compound in Idaho, but I did geek out a bit over some of the exhibits, including super-smooth bamboo flooring samples, solar ovens, straw-bale homes, and my next car--a hybrid Honda Civic. 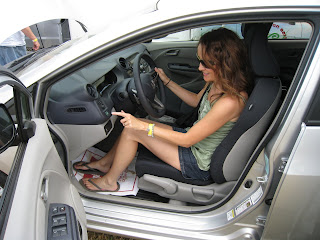 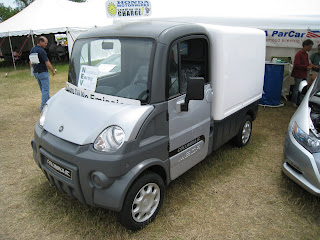 I've always wanted to drive my toaster. Do you see the man in the background? The handwritten sign on his back reads, "Batteries for sale." Also, I could tell he cut his own hair, because there was a super-shaggy tuft behind his right ear.

There were, of course, plenty of electric cars and vehicles converted to run on veggie oil. So, if you've ever wanted to drive around smelling of french fries, you may want to look into this.

I also picked up a free back issue of Countryside & Small Stock Journal (The Magazine of Modern Homesteading). I was attracted by the article on canning but fell in love with the black and white newsprint-y pages, chock-full of ads for miniature cattle and books like Wild Game Cookery. I also loved the suggestions sent in from readers, with headings such as "Rabbit breed corrections," "Converted mobile homes may not be insurable," and "Cheaper chicken fencing."

The pen pal pages were similarly fabulous. A young woman looking for a homesteading mentor has to specify "no felons, druggies, or freaks," which leads one to believe she's had this problem before. A homeschooled boy enjoys "music, singing, and drawing on occasions. I also enjoy talking to God." A political prisoner "seeks correspondence with others who are primitivists by choice," and a priest looking for Catholics interested in establishing a faithful, off-the-grid community invites readers to "email ... for the details of how a married, Protestant minister with four children became a Catholic priest."

The current issue features an article entitled "Swap your Lawn for an Edible Garden."

So J, can I? Also, can I have an alpaca and some chickens?

Taking Flight, run by the fabulous Raptor Education Group in Antigo, Wisconsin, is like crack to me. I check in daily to read about their feathered rehab patients' progress.

True Blood is back on HBO!

More bloodsucking entertainment: Let the Right One In, a lovely, tragic, and ultimately (strangely) hopeful indie vampire flick from Sweden. Also, it seems to take place in the early eighties. Bonus!

J and I both loved this movie. In fact, J even announced that he "wouldn't like anyone who didn't like this movie."
Posted by Jess Riley at 9:11 AM