The Good, The Bad, and The Boring

The good news is that Jason seems to be back to normal, and I am in no imminent danger of becoming a widow. (Thank you everyone who wished him well!)

The bad news is that I’m an Xbox widow again, effective immediately.

The good news is that we received a lovely snowdump this weekend; everything looks draped in marshmallows, which can be delicious in hot cocoa.

The bad news is that I threw my back out shoveling. AGAIN.

The good news is that we installed a snazzy and efficient tankless water heater.

The bad news is that it cost twice as much as the original bid.

Even more bad news: every time I now run hot water, Daisy goes bananas barking at the clicking noises made by the heater. (She believes that a mouse, bird, or animatronic biscuit live in the heater housing.) When I demand water, Daisy demands to know what kind of monster has taken up residence in the new metal box on the wall.

She will be asleep on our bed upstairs and if I wash my hands downstairs, the faint clicking from the interior heat mechanism in a small metal unit an entire floor below will lead her to vault from the bed (waking up in mid-air), dash down the stairs at top speed, barking all the way, and spin in circles beneath the water heater, growling and shriek-barking as only a Cairn Terrier can.

The same results occur when you:

I’m going to try to upload a photo of her frenzied assault on the water heater tonight. In the meantime, I will be sitting very still (so as to not disturb my lower back) while I explore the cumbersome registration process for online grant submission, trying not to bash my head on the keyboard in frustration. If you’d like to send a rescue team for my soul, please feel free.

On Monday Jason called me at work to inform me that he was feeling dizzy and had “tunnel vision.” Since my only (young) dependent is a vocal but non-verbal dog, I’m pretty much clueless when it comes to interpreting such statements. Was he looking for my blessing in a bid to leave work early for a marathon Xbox session on the couch? Did he simply stand up too quickly? Did he eat some bad cheese? What do I tell him?

I decided that honesty was the best approach. “I don’t know what to tell you, hon.” I was stumped. “Put your head on your desk and close your eyes for a minute?”

I had an elementary school teacher who suggested that for almost every malady, so I thought that was a good place to start.

I instructed him to call me if he got worse. We hung up and I returned to whatever task I had been engaged in earlier, thinking this was a false alarm. In fact, he called back to tell me he’d gone for a walk and was feeling much better. So I was surprised when I received a call from his boss an hour later from the emergency room.

Apparently, the dizziness and kaleidoscope / tunnel vision had developed a new twist: numbness below the left elbow. (Although I wouldn’t know this until I arrived at the ER.)

As soon as Jason’s boss called, I assumed the worst. My mother lost an early boyfriend to one … my best friend recently lost her mother to one … and a friend’s brother was just diagnosed with one. So of course it had to be a brain tumor. A quick Google search (I know, I know) of “tunnel vision symptom” only bolstered my initial diagnosis.

And suddenly it was as if I’d put on the wrong glasses, getting a glimpse into what life might be like if my fears were confirmed. I couldn’t believe I had ever been so concerned about petty things like proper dish-washing and stacking technique, whose turn it was to take the dog out, toilet seats left in the upright position, etcetera ad nauseum. I wanted to be back in the world of such issues immediately. I wanted no part of the world of terminal illness and early loss of a spouse. I wanted to gripe good-naturedly about work, waffle over whether or not to have children, and find food delicious and irony amusing. I wanted my husband to never feel pain physically or emotionally. I wanted to stop focusing on what I wanted and be the person Jason needed. If it came to that.

How do widows and widowers carry on? How is it even possible? I didn’t want to know. The first four stages of grief cycled through me on the drive to the hospital—especially bargaining. I don’t really “talk” to God, as I’m not sure she exists. And if God did exist, why would he give a rat’s ass about my petty problems? There are entire families being murdered in Darfur. There is tragedy out there on a scale I can’t even comprehend—much of which is affecting more pious individuals.

But you can bet I was making all kinds of bargains with God on my way to the hospital. I used the word "Please" alot, as if excessive politeness would bump me up in a long line of prayers awaiting answers.

I arrived at the ER and promptly got lost in a maze of corridors. A kind nurse eventually led me to Jason’s room; he was reclined on a gurney, his chest pasted with EKG disks and wires. He looked exhausted. The sight of him in so vulnerable a position broke my heart. (Also, his boss was still sitting with him; is that a great employer or what?)

The prognosis? The EKG was normal—no heart attack. Brain scans revealed nothing—no masses, no bleeds, only a clear picture of the organ responsible for running the goofy man I love.

A very nice doctor with one hell of a lazy eye told us Jason’s symptoms stemmed from a certain kind of migraine, which can affect vision and even lead to bilateral numbness and paralysis. Then a male nurse came in to wrap things up, first racing to the heart monitor and shouting, “Oh my god! … Just kidding.”

J needs to make an appointment with a neurologist to make sure his mind is only as warped as it was last week, but it looks like he’ll be fine.

I was so relieved to walk out of that hospital with my husband. Odds are we’ll be back, sooner or later. It’s all part of being human. But I’m certainly hoping for “much later.”
Posted by Jess Riley at 11:50 AM 38 comments:

Email ThisBlogThis!Share to TwitterShare to FacebookShare to Pinterest
Labels: emergency

A Fabricated Incident for Your Consideration

I have a hypothetical situation for you. Suppose, hypothetically speaking of course, you are working on a time-sensitive project with an individual you just met. The project is worth a great deal of money. Further, you are unfamiliar with the type of project and must immerse yourself in a stack of research that is seven inches tall.

Yes, I measured. In my imagination, of course.

Suppose—again, this is purely hypothetical—you are beginning to feel the stirrings of angst that always set your heart aflutter and strike you nearly-dead two weeks prior to a project’s deadline. This feeling, once abloom in your gut, only grows with increasing urgency into nuclear proportions as your two tactful emails “touching base!” and “just checking in!” go unanswered.

If you had emailed such messages (not on the same day), of course.

So your possibly imagined emails have gone unanswered and the speculative deadline for the “Maybe she’s born with it, Maybe it’s Maybelline” unfamiliar, scary project is rapidly approaching.

And then? And then your inbox dings a merry little ding (Ding!), speculatively speaking, and you click “Open” with much theoretical anticipation.

You hold your breath.

Your prayers, conjectural that they are, are about to be answered with the information you so desperately need to finish the assumed job in a successful manner.

So what does this hypothetical email response to your polite “touching base” inquiries read? Well, I’m not saying this happened to me yesterday at 2:46 p.m., but the email (could have) begun:

All-caps signify shouting, and you may be surprised to learn that I’m not a fan of being shouted at. (I know! It shocked me, too!)

Now, if this was a real situation, I would have been aghast. My cheeks would have flooded with hot shame. I would have second-guessed myself immediately (did I come across too strong? Am I being annoying? Did my last email sound bitchy? I am being annoying, aren’t I?)

So the question I beg you is this: hypothetically speaking, is this person being incredibly passive-aggressive? A big meanie? Or am I reading waaaaay too much into a supposed situation?

I should also tell you that in my spinelessly effusive first meeting with her I went a bit overboard with the “charm,” asking her all about herself, including how long she’d been a (insert relevant career position), if she enjoyed it, and whether or not she still lived in the city. To which she snipped, “Yeah. You asked me that already.”

Now, hypothetically speaking, what do you think?

Remember how last summer everyone was complaining about how hot it was? And I was bitching right along with everyone, likening the sultry weather to Jabba the Hut’s taint? Right. Well, now I’m going to whine about how cold it is and compare it to Darth Vader’s soul, which is nowhere near as funny as Jabba the Hut’s taint, but I can’t feel my feet right now, and we all know that feet are responsible for 98% of a person’s sense of humor. (I can barely feel my fingers too, but luckily they’re only responsible for my personal hygiene, daily food intake, work completed, and the general life activities in which I engage.)

I hope you’re holding up and haven’t lost any digits to Jack Frost. Daisy is once again using pee pads in the back hall, since she wastes so much time sniffing things outside that by the time she actually hears my voice (“Go potty, Daisy…go potty…go potty, Daisy…come on, go potty. Hurry up. Go potty.”) she’s also realized that she can no longer feel her paws and must sit down and make a pitiful “Carry me” face. So hello, pee pads. Welcome back, old semi-absorbent friends. This is not something we’re proud of—it’s a little like putting diapers back on your preschooler long after they’ve learned to use the grown-up toilet with regularity. (Except hopefully your preschooler doesn’t eat his or her own poop.)

But since she’s the kind of dog that would lie down and glue her stomach to the linoleum in protest if I were to stuff her feet into canine booties, we’re forced to retreat to the old, cold weather / lazy owner standby of the Arm & Hammer pee pad.

So anyway, where was I going with this? Oh right! My dinner at HuHot Mongolian Barbeque on Friday night. Which is memorable because before dinner, my 4th grade teacher friend Fee showed me a note one of her students had carefully placed on her desk earlier in the week. 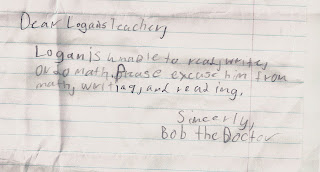 Don’t you love it?

If that doesn’t warm the cockles of your heart, I suggest stopping by the Daily Puppy, or maybe checking out this David Hasselhoff calendar.
Posted by Jess Riley at 9:40 PM 26 comments: