Last night I met with my Pretty Aunt Julia's book club...the treat of the evening (other than seeing my fabulous, generous, talented aunt) was meeting the members of the club--particularly one woman's 84 year-old mother, who arrived with a hip flask of bourbon and a can of 7-Up. Her 85 year-old husband came later with his son to take the group's picture...and there they were, two fantastic older people who had been together more than 60 years, holding hands on the couch. You look at that and think, "That's it. That, and Disney movies, keep the dream alive."

We had pie (banana cream and apple), both made from scratch by my aunt, and lots of laughs. Then this morning, I was disturbed to find a dead Monarch butterfly on the street right next to my car door. Which, since I raised and released 58 Monarchs this summer, I found kind of freaky. More than freaky. It was like the universe reminding me that life isn't supposed to be all fun and games, missy! There is DEATH waiting right outside your window!

So that's kind of cheery, isn't it?

In other news, I will be speaking with four fellow authors on a panel on Friday: part of the UW-Oshkosh alumni events. We'll be at Reeve Union at 3 pm on October 22--if you're able to join us, I'll tell you a funny story or two. And if you can't come, the stories will be even funnier and secretive, just to make you feel bad for missing it. If you really and truly can't make it because you have to earn a paycheck to keep that damned roof over your head, I'll also be blogging at the Girlfriends' Book Club on Friday. Stop by and say hi! Or don't, and miss some good shit.

We're also having a Halloween party on Saturday. I'm trying a new trick this year: inserting the bag from a box of wine into a carved jack-o-lantern, with the spigot sticking out of the mouth. It'll be so classy! I can't wait. Nobody's dressing up, but last night my aunt told me that some of her siblings used to always dress up as Asses: there'd be a Candyass, a Tightass, a Fatass, a Badass, a Cheapass, a Wiseass....you get the idea. So now, I wish we were having an Ass costume party. I'd love to go as "Crafty-ass." I could glue pipe cleaners and buttons and google eyes on my back pockets.
Posted by Jess Riley at 12:44 PM 2 comments:

Are you there, blog? It's me, Jess. I have no excuses for being so neglectful. Things have happened that have certainly been blog-worthy. A few weekends ago J and I "rescued" a Monarch butterfly tangled in its chrysalis (we used tweezers and Q-Tips, in case you're wondering), and at 2 in the morning last week I woke to the sound of gunfire (which turned out to be the sound of my shave gel exploding in the shower. It was so rusty the integrity of the container was compromised ... had I gotten up for some midnight hygiene, I could have lost an eye!). We also caught a fantastic exhibit at the John Michael Kohler Arts Center, stumbled across a fall festival on the riverwalk in Sheboygan, and had the best dinner we've had in years, at Stefano's. So good we briefly lost the power of speech and get misty-eyed just talking about it.


We're still trying to sell our house, I'm back to work, and I'm still plugging away on one of my novel proposals, which is giving me fits. BUT! Something really neat has happened! I have a new niece. Her name is Corinne. Isn't she beautiful? 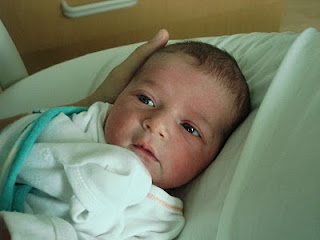 Welcome to the world, wee one! She may need to wear a teeny leg brace for a few weeks to straighten out a minor hip issue, but it will be the cutest leg brace in the history of orthopedics, and all will be right with the world after the whole experience. (North Korea and Afghanistan not included.) Well, there's also the issue that it appears she was born with a giant thumb stuck to the right side of her head--nothing some minor cosmetic surgery can't help with.


Her older brother isn't as thrilled with having a new baby sister, but he'll come around.


It's the autumn of babies: Corinne is the first of three nieces for us this year, and I have several friends who have had or are expecting their first babies as well. So of course there is some self-reflection going on (to have or not to have, that is the question...ideally answered before my ovaries shrivel up). But in the meantime, we get to enjoy all of these bundles of pink (yes, all girls!) with their soft, baby shampoo-scented heads and hand them back to their parents when the crying begins.
Posted by Jess Riley at 1:20 PM 3 comments: