I Should Wear My Glasses More Often

Last night I saw the Beatles tribute band, "American English." Seriously people? They LOOKED and SOUNDED exactly like the Beatles. They even did two costume changes to trace the band's evolution from mop-tops through the drug years, ending with "Hey Jude" as an encore and the entire audience sang along. Goosebumps...I'm telling you.

Earlier in the evening, I thought I saw a couple we're friends with making their way through the crowd...I called out their first and last names, jumped in front of them with a big smile, ready for a hug--she gave me a polite, confused smile, and I looked helplessly back and forth, first at her, then at her husband, then back at her, waiting awkwardly for either to recognize me. It took a few seconds for me to realize, with some horror, that they were NOT my friends, but could play them on TV. "I'm so sorry!" I gushed, "You could be dopplegangers for some friends of mine!"

Yeah. I actually used the word "doppleganger." Good grief. I could see them whispering and laughing as they walked away. I imagine they said something to the effect of, "What was up with that drunk? And what the hell is a doppleganger?" Which I wasn't (drunk), but I will tell you this: next time I'm in a public venue at dusk? I'm wearing my glasses.

It wasn't as embarrassing as the time I thought I recognized some girl in a store and waved at her only to realize I WAS WAVING AT MY OWN REFLECTION IN A MIRROR, but it was still pretty bad. 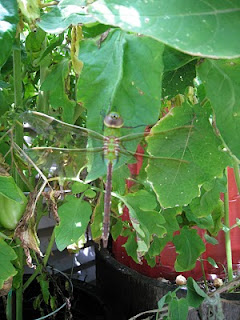 I was watering my tomatoes the other day and discovered this little guy hanging out. Though he's about 4 inches long, I nearly missed him because he was so well-camoflaged. 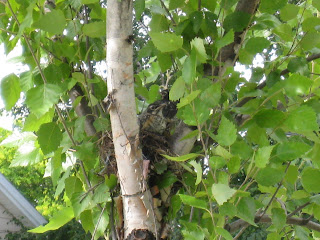 See the baby Robins in the nest? I'm pleased to report they successfully fledged, though it took a full day for the last one to gather the courage to fly from the tree. As far as I know, they have evaded the neighbor's cat. Yay, Robins! 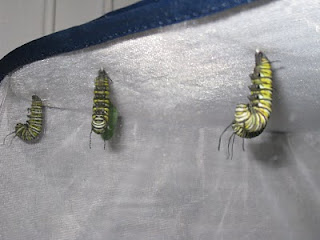 Four Monarch caterpillars hanging out (har-har) before their skin splits open and they form their chrysalides. Yeah--you read that right. "Skin splits open." It's totally disgusting and my nephew would LOVE it. Also, when they are caterpillars chomping away on milkweed, they go through five growth spurts ("instars"); every time they shed their old skin, they turn around and eat it. GROSS and FANTASTIC.

July is Almost Over Already?!?! Did I Blink?

I am writing this to the sound of two things: Metallica's "Master of Puppets" and hammering. So guess what that means? We are STILL working to get our house listed.
I am sad to say our bid for House #1 didn't work out (yeah, not going to carry two mortgages if I can avoid it...). However, we viewed two new prospects on Saturday, and we love things about each one. I believe we will go for a second showing at one very soon.
You know, you never realize what a dump you live in, and how much useless shit you've accumulated, until you face the prospect of moving and selling.
Also, I'm pleased to present (drum roll .....): Monarch Ranching 2010! 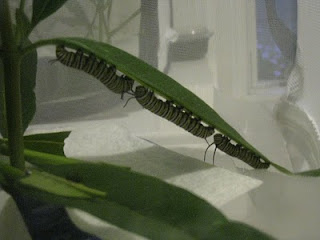 I love these three little guys (or girls), all lined up in a row. I have 17 in two mesh cages right now, and they are eating, pooping machines. By the weekend, most should be in chrysalis form. I have been seeing Monarchs flying around the yard every day--yesterday two got into an impressive battle over rights to the milkweed patch. So, there are more eggs on deck! And here I was all worried I wouldn't see a single butterfly in my yard this summer.

Speaking of yards, the most impressive three clumps of flowers in this shot are all volunteers. That is, I didn't plant them there. I just left them because: a) I am lazy; and b) they looked purty. 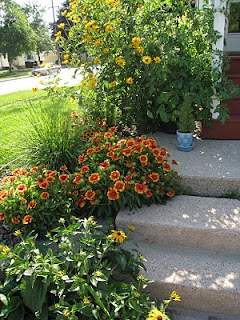 More volunteers below. Goldfinches have been plucking seeds from the annual sunflower at left. 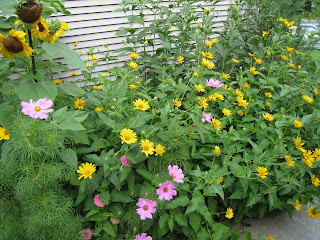 Aurora Peppers: hot, spicy, and floral. Last year I made hot apricot jelly with them. 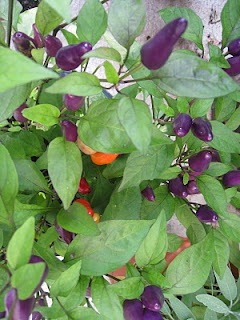 So much other stuff has been happening beyond gardening and painting and priming and organizing that I don't even know where to begin: there has been frog-herding in Door County, grant-submitting, family-reunion/funeral-in-another-state-attending, mojito making, and fiction writing. 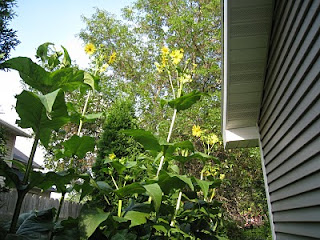 These tall gangly suckers are Cupplant. They are currently 10 feet tall. 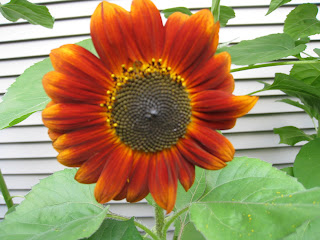 I DID plant this sunflower.

(Now: "Shout at the Devil" and a bandsaw in the garage.)

I'll try to update again soon--there are baby robins in our front birch tree, and I'm hoping to snap a pic. They are homely and fuzzy and adorable with their giant clown mouths, and they're about five days from fledging. (Is it terrible of me to say I'm kind of relieved that our neighbor's outdoor cat/killing machine has a limp? Yes, it is terrible. Terrible and TRUE.)

PS: Thank you to Melissa's book club in Spring Green; you guys were great!

We put an offer on The House last night. Which meant I was tossing and turning 'til 3 a.m. I love it, but would we have buyer's remorse because of x and y? What if we can't sell our house? What if we really and truly can't afford it after all? What if it's the worst decision we've ever made? What if it's the best?

We have about a week to whip our house into shape: finish sanding drywall mud, install beadboard wainscoting in the kitchen, paint at least three rooms, organize, and LIST. And then wait. In the meantime, I have a bitch of a grant due on the 19th, I'm going to Indiana for the weekend, I'm having heart palpitations, and I've got a book proposal to tweak.

We find out if our offer was accepted by tomorrow. In the meantime, I will be working on a grant and trying not to throw up from all of it.
Posted by Jess Riley at 8:40 AM 8 comments: