So I promised I’d post some recipes this week, but wouldn’t you know, I went ahead and screwed up the salsa I made in a major way. So I decided not to post that loser of a recipe. But if you have about 50 Roma tomatoes and you’re looking for a quick way to turn your tongue inside-out and mummify your kidneys, let me know. I think I can help.

Today events conspired that made me want to write a post dedicated to workplace harmony. So without further ado (because who needs all that ado? ---Somewhere in Kentucky a young man raises his hand and drawls, “A’do”----)

But I’m not ready to be fired yet, so I probably shouldn’t write about it. What do you think? Should I write about it? No? Alright, you always had such good sense. What's that? I should? No. Yes? Really? Okay, I will.

So I had one of those “less-fun-than-mono” interactions with an individual I met with as a result of the fact that I need to earn a paycheck to eat and live in a heated abode and keep that heated abode stocked in boxed wine and Spam. And by “less-fun-than-mono,” I mean that I left our interaction feeling that I had just spent an hour with a creature that crawled from a pore on Satan’s butt.

For some reason, this person really took a disliking to me. And it wasn’t because I asked if she had crawled from Satan’s left cheek. I didn’t! I practically offered her a million dollars. A million chocolate-covered dollars. I complimented her hair. I asked how her weekend was. But the ice queen was having none of it. She nearly punched me out with her frostiness. If ‘unfriendliness’ became personified and developed skills, hers would be able to karate-chop the hearts of orphans in half. And it would do so with gusto.

I think we can all relate. Once in awhile, we will just have to deal with someone who was born hating us. And I am less able to be successful unless I establish a rapport with whatever individual I must work with to complete the task at hand. We don’t have to be best friends. But there has to be a basic level of trust, friendliness, and politeness. To that end, here is a helpful list of ways to make the most of a workplace relationship:

And if you must deal with such a creature in the course of your daily work, remember: you’ve got a box of wine, a can of Spam, and good people and pets at home. You’ll be alright.

The kind of post I write when I’m feeling surly

On Saturday we attended the Great Lakes Brewfest with some good friends. And if I take anything away from the day, it is this: when the temperature is below sixty degrees, it may not be a good idea to wrap a satin table runner into a tube and wear it as a jazzy skirt with tap shoes. If you do, I’ve-Seen-Dental-Tape-Wider-Than-That-Skirt Girl, it’s a good idea to continue shaving up past your knees. Remember, this is Wisconsin in September. We will clearly see how far that razor jogged north before getting winded and turning back in defeat. And put some socks on, while you’re at it. Those shoes look terribly painful. No, really. They have both heels and laces, so I really think socks would be appropriate. Why stop now?

Here’s something else! Say there, fellow standing in line to urinate. Why the red contacts? You are scaring me and our fellow festival-goers! This is not Halloween. It is not a gathering for Druids with severe hay fever. It is a celebration of artisinal beers and fried cheese! Of merriment and mirth! Look there, young people wielding humorous back scratchers featuring tiny hands! Amusing giant hats! But not you, Mister Red Eye. Are you that much a fan of raspberry hued daily living? Do you like your humanity in shades of scarlet? Are you really a minion of Satan who is simply not above humble human activities like standing in line with the rest of the herd to break the seal in a public urinal? Those are things to work on, Red Eyed Underling to Beelzebub. Maybe you should send your boss some candy for Boss’s Day and he’ll give you amazing Bottomless Bladder and Instant Line-Jumping abilities. I hear he likes red hots.

And you there—girl in the “Beer Chick” shirt. It’s pink, and I appreciate a nice pink t-shirt. Pink is girly, pink is fun, pink is the Best Of Red and White, the Atlantic Years. But really, your presence at an event dubbed “Brewfest” is more an indicator that you are indeed a fan of the malted barley and hops than your “Beer Chick” t-shirt. What’s next? A black shirt reading “Funeral Chick” when a beloved great aunt dies? “Grocery Store Chick” stretched over your bosom when you run out of toilet paper, kitty litter, bologna, and capers? Maybe you could layer shirts, depending on your day’s itinerary. You could start with “Breakfast Chick,” peel it off at ten a.m. for “Playing Solitaire at Work Chick,” pull that one over your head to reveal “Drives like an Idiot Chick” for the commute home, and end the day with “Lean Cuisine and Scrubs Chick.”

So those were the things I took away from Brewfest, plus some delicious cheese curds that have already made a new home on my thighs. (I try to be accommodating to my snack foods. Help them move, provide transportation, sit very still so as not to jostle the metamorphosis from delicious foodstuff to bouncy little mustard-colored fat cell.)

Whew. I feel better now. Next week I’ll have some recipes and maybe even a special taste-testing photo essay. You’ve been warned.
Posted by Jess Riley at 12:50 PM 17 comments:

Time for Something Classy

Has a friend ever said something, a simple little line, or maybe they shared an innocent yet amusing anecdote, and it became completely embedded in your head to the point that you started using that comment or anecdote with other friends and family? And then they adopted the line or story and started telling it to their friends, and soon enough the whole thing spread across the nation like a bad taste sensation? It’s sort of like a chain letter, but you don’t get five dishtowels in the mail or your wish granted at 3:14 p.m. by angels if you pass it on to ten of your BFFs.

I’ll give you an example. In college, my friends and I regularly ate dinner together after class. One of my friends always dined at a more languorous pace than the rest of us and once rebuked us when we attempted to leave too soon with a defiant yet sing-song, “I’d LIKE to finish my WATER!” For some reason I shared this with my family, so now whenever one of us is taking our sweet time at a restaurant and the rest of us are antsy to leave, someone says this exact phrase in the same irritated intonation. My dad says it, my brother says it, and with a little persistence, we’ll have my grandma saying it by Christmas.

The best part is that usually the person behind the incident has no idea how popular it’s gotten. And now it’s my turn in the hot seat.

Yesterday I was chatting with a friend, and suddenly she started laughing. “You know," she said, "I thought about you the other day when I was talking with A (her son).”

I knew because a few years earlier I'd made the mistake of telling her that I'd boarded the (insanely slow) elevator on the seventh floor of my office building and absentmindedly let one rip, only to have another rider board the elevator immediately afterwards, on the sixth floor. It was the classic Fart in the Elevator For Unexpected Company gag.

So my friend told my story to her son, who happened to be at the age where farts are the pinnacle of humor. He was between 1 and 99. My little (sneaker) anecdote latched itself to their shared history, and every time they’ve boarded an elevator in the seven years since, they look at one another and giggle over me and my friendly little fart in the elevator.

I know this because she told me.

So as this boy grows up, he will always think of me as the Person Who Farted in the Elevator (And Then Another Person Boarded the Stink Box and Probably Gagged). I will be thought of this way even if I single-handedly rescue every resident of a four-story burning nursing home or develop the ability to summon marshmallow unicorns with a clap of my hands.

Ladies and Gentlemen, I am honored to share the first ever blurb for Riding with Larry Resnick, graciously penned by the very talented Kristy Kiernan, author of Catching Genius:

"Jessica Riley's Riding With Larry Resnick is a brilliant and hilarious debut. With the knowing humor of Emily Giffin and the poignant vulnerability of Lolly Winston, Riley proves herself a huge new talent who will break your heart even while you're laughing out loud. If I ever need a funny bone transplant, I want Jess Riley's."

Kristy? Thank you from the bottom of my once-almost-gave-up-writing-for-good heart. The check’s in the mail. Kidding! It’s actually a Candygram from Armando and His Magic Wando.

Alright, but that’s not what we’re all here for, is it? We’re here for the goods. The promised pixilated perfection. Photographic evidence that I’m not just blowing smoke up your hineys that my nephew is the most adorable little dude since George Burns.
I know, George Burns…is she smoking crack? No, she’s just remembering that she watched Oh God! on the oldies movie channel two weeks ago. 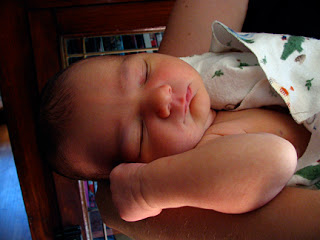 Look at that face! And that pudgy, ready-to-crush-you arm—he’s definitely related to me, as my upper arm has a part-time gig demolishing condemned buildings. (This was actually the camera angle. His arms are really tiny and tender. I’m sure this is exactly how he’ll want everyone to describe them when he’s 16, too.)

Since I’m so thrilled with my first-ever blurb, I decided to write a blurb too, for my new nephew. I call him Corby:

"Madeline M’s debut project sparkles with life! I was smitten by Corby from the beginning, and then he got the hiccups. Could there be anything more swoon-inducing? Watch out preemie girls—this one will break your hearts someday. With her sense of humor and seemingly effortless grace, Madeline is a natural-born parent. I can’t wait for the sequels from this new mom to watch."

--Jess Riley, Godmother Who Will Spoil the Kid Rotten 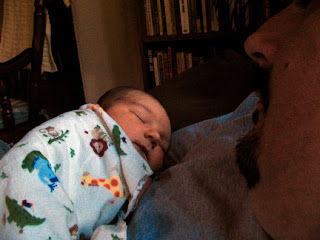 This baby is a fun-sized nugget of cuteness.

I’m over at the Debs this Friday. Stop by and say "howdy." If you’re like, bored at work or something. I’m just sayin’.
Posted by Jess Riley at 8:52 PM 29 comments: