If you're an avid reader of this blog (stop laughing), you may have noticed a few changes to the layout. Yes, things are happening! A new header is in the works, and I'm also going to tackle my disaster of a website in the next few months.

Spring cleaning, yes, but also because I'm gearing up to launch Mandatory Release this July. *breathes into a paper bag* I have cover art, and I am DYING to share it with you all....soon enough. Julie Metz designed it, and guys: she did the cover for Judy Blume's Summer Sisters. Recognize any other names in her portfolio? She's amazing, amazing. More on this soon...

Mandatory Release is "officially" my third novel, but I actually started it fourteen years ago, under a different title, with a different plot and different characters. I've read the opening chapter at several book events years ago, so some of you may remember it.

I don't know if other authors are like this, but my novels feel sort of like my children; I always worry, at least a little, when I release them into the big, wide world. But with Driving Sideways and All the Lonely People, I felt they could take any kind of heat. Strangely, the book with the toughest setting and darkest themes and most vulnerable, honest, and raw characters is the book I'm most protective of. It's the book closest to my heart. It's the book that felt like opening a vein and bleeding onto the page.

Mandatory Release features my favorite character ever; if you liked Driving Sideways, I basically took Leigh Fielding, gave her a spinal cord injury, a crush on a coworker, mild anger issues, and a job in a prison. Oh, and I made her a guy. Okay, that sounds a little weird. But I think you're going to like Graham. He's got a sick sense of humor, lots of hope, and lots of heart.

It's a crazy mash-up of dick lit and women's fiction, written in alternating POV chapters. Maybe my tagline can be, "Throws like a girl, writes like a boy." My editor said it reminded him of Tom Perrotta, and I had to lie down when I heard that because The Wishbones is only one of my FAVORITE BOOKS EVER.

If you're in the Appleton, WI area this Wednesday April 17, I'll be at the Little Chute Public Library at 6:30 pm, for the Fox Cities Book Festival. I'm not sure what exactly I'll be talking about, but bring some questions--let's play "Ask Me Anything!" (Er, sort of.)

Sneak Peek: Yesterday I created a playlist featuring songs that would be my soundtrack for Mandatory Release. There's one key song that I didn't include, because if I did, I'd give a huge plot point away. I was all proud of how I figured Spotify out until I saw that a few songs didn't make it over on the embed, so you'll just have to pretend "Pursuit of Happiness" by Kid Cudi, MGMT, and Ratatat is there. Also, if anyone wants to make MR into a movie? I always thought "Vaya Con Dios" by Les Paul and Mary Ford would be a fun backdrop to a riot scene. Just sayin'. 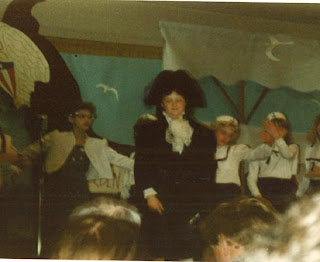 In case you were wondering, I picked "Heaven" by Bryan Adams. I made my friend Pam sing "The Living Years" by Mike and the Mechanics, and I still can't believe what an evil bastard I was back then.
Posted by Jess Riley at 6:00 AM 4 comments: