Cat in a Cold Stone Cistern

(Which is really the opposite of a Hot Tin Roof.)

My parents live in an old farmhouse they bought at a real estate auction in the early eighties for a song. What song, I don't know--maybe it was that old favorite, "You Will Never Stop Remodeling This House (and one day your son's friends will Saran Wrap a dead possum to the porch)."

Anyway, it's a farmstead, which means it came with a garage, outbuildings, and an actual barn with hay and Official Farm StinkTM in the actual barn. At the time, a local farmer still housed his cows there and pastured them in adjacent fields; the fence that ran the eastern length of our front lawn was electrified. An electric fence, oh what fun! I still have an eye twitch from that game.

Because it's a farm, there are lots of cats roaming around. This is just how it is. They're not pampered indoor cats with immunizations, sterilizations, toys, and fully functional limbs. Nope. It's a rough life for a farm cat--at least it used to be. I can't tell you how many abandoned litters I tried to hand-raise when I was a kid, only to have most of them ultimately crawl behind major appliances to die, which is a memorable day in any eleven-year-old's life.

Anyway, there is now a fairly stable herd of cats at my parents' homestead. (I don't know what you call a large group of cats--a flock? Gang? Audience?) And most of them get along just fine. My mother nurses the sick ones as best she can, taking them to the local vet as needed. The latest to need such treatment was an adorable kitten named Molly, who was originally named "Malcolm McDowell," after the actor in A Clockwork Orange. I'll let you digest that for a moment.

After Molly's visit to the vet, she was allowed to recuperate in the basement. Recently, my mother went down to feed Molly, but the kitten was nowhere to be found; beyond some disembodied meowing, she could have vanished into thin air. Turned out Molly had gone exploring and gotten trapped in the old cistern adjacent to the basement. (What's a cistern? A kind of well where old timey folks stored rain water. A good place to bury the bodies in modern times.) My mother cobbled together a kind of stick/fishing line device to try and rescue the kitten, but the entire contraption fell into the cistern.

"I was so heartbroken," my mother continued. "I was ready to crawl into the hole to rescue her, but I wouldn't fit. You could hear the kitty just meowing and meowing, and it was so sad. Dad said it would probably take four days to die of thirst down there. I was too depressed to even listen to Garden Talk on Saturday morning."

Well, there's no way my mother was going to endure four days of progressively sadder / softer meowing and another week without Garden Talk, so my parents called A Guy (we all know A Guy, right?) who helped secure their barn's foundation and is good at "lifting rocks and things." The plan was to strategically remove a few of the rocks cemented into the wall between the old cistern and the basement so my mother could crawl in and retrieve the lost kitty, but it turned out that would put the entire house's foundation at risk.

Plan B: cut a hole in the ceramic tile floor in the kitchen, which covers the cistern. So The Guy strategically cut into the tile floor, and there was the kitty! My mother lowered an old sheet into the hole, hoping the kitten would claw its way up, but instead it just rubbed its head on the end of the sheet. So, The Guy made a tiny ladder from some wood scraps, and the kitten eventually clambered up.

"The bad news is, there's a hole in the kitchen floor," my mother added. "The good news is, Dad's going to make the hole bigger--"

(I interrupted here with an outburst of laughter.)

"--and turn the old cistern into a root cellar, with a trap door in the floor to get in."

Jesus, this is getting long. I don't really have a good way to end this story, other than to say: a) the cat made it--yaay!; and b) let's hope a small child doesn't fall down the hole before the trap door is installed.

Is Your Husband Trying to Tell You Something?


From time to time, J comes home from work with a box of “product.” It’s a perk of the job. These freebies have included cases of paper towels, toilet paper, dinner napkins, full-sized boxed tissues, travel-sized tissues, disposable hand towels, and pre-moistened “cleansing wipes” when you have a sticky poo.

It’s a little like Christmas any time he comes home with a giant bag o’goodies. What will it be today? What’s in the box? Will it be anti-viral tissues in Hanukah-themed boxes? Paper towels that smell like cinnamon and pork? Now, I don’t mean to humble-brag, but last night J brought home 24 bottles of feminine wash. 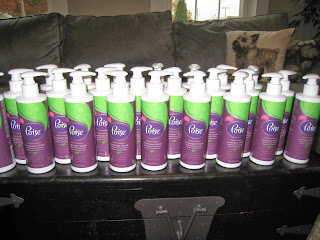 He introduced the day’s haul by eloquently saying, “I don’t know what you’re going to do with it, but it’s wash for your coochie. I guess you squirt it in your hand and just kind of wipe it on?”

Ladies, has your husband ever come home from work with 24 bottles of feminine wash? I know I let personal hygiene slide from time to time when I work from home, but this is more than a hint.  This is like signing your scurvy-riddled cousin up for the citrus fruit of the month club. This is like mailing your ex-boyfriend a case of extra-small condoms and a tube of Abreva. Or like offering a coworker with severe halitosis a stick of gum, bottle of Scope, package of floss, sample-sized toothpaste, gift certificate for a SonicCare toothbrush, and full-color, framed caricature of him or her walking through a car wash with his or her mouth wide open.

I started to make a list of things a person might do with 24 bottles of cooch cleanser, but this is all I could come up with:

I guess I’ll have to research the ingredients. Can I wash dishes with this stuff? Do laundry? Give my dog a bath with it? (She’s already endured many indignities as a pet in the Riley household, what’s one more?)

While I’m figuring out what to do with 24 bottles of cooch cleanser, I have a grant proposal to finish. Also, All the Lonely People will be re-launched NEXT WEEK with a new cover, special sale, and a giveaway.

And if you would like to give an autographed paperback copy of any of my three novels to a reader on your holiday gift list, please email me. Ten bucks for each signed book, including postage (Sorry, U.S. addresses only.) I'll get the signed copies to you ASAP!
Posted by Jess Riley at 2:04 PM 3 comments: