This year, instead of baking cookies and scones and whipping myself into a flour-dusted, sugar-crusted frenzy, I decided to take a cue from my globe-trotting colleague L, who is in Mexico for the holidays. Why not do something a little different? Edgy? Unexpected? Thus, I decided to make a warm, fragrant Vietnamese Pho for dinner on the Eve of Christmas Eve.

What’s a Pho? Well, a pho is a traditional Vietnamese soup with noodles, sprouts, basil, baked tofu, and a spicy broth flavored with ginger, garlic, mushrooms, and spices aplenty. Since it was featured on the cover of Vegetarian Times this month, I thought I’d give it a shot.

Mr. Riley, despite his skepticism, was a good sport. He ate a whole bowl of Pho, making his “I dream of a wife who enjoys beef” face the entire time. (Uh, ignore the innuendo there.) “It tastes like cinnamon-flavored water,” he concluded. “Can I make a pizza?”

So, this will be my phirst and last time making pho. It’s not very phlavorful OR philling. Here’s a photo of my pho: 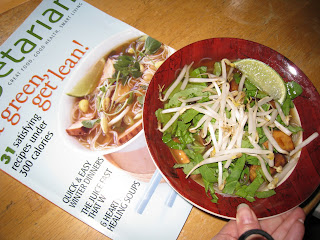 What the Phuck is This? 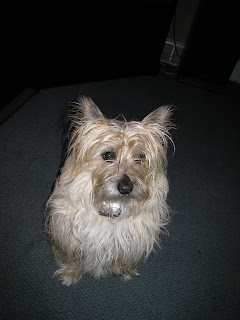 Uh, yes. Pink Human Who Distributes Food Items, I’ve got just one question: Why does it smell like napalm in the morning?

Before I could make my pho, I ran to the local grocery store in the middle of a blizzard to stock up on the necessary ingredients. And as I carried my canvas sacks loaded with foodstuffs from the trunk of my car to the house, I slipped on a patch of the slipperiest ice formed since water first met 32 degrees Fahrenheit, fell in love, and changed it’s previously familiar way. This ice was sprayed in Pam cooking spray, Teflon, and WD-40. Naturally, my sensible hiking boots were no match for such a slippery-ass surface, and I pitched forward onto my sacks. (Alright, who’s giggling? Get your mind out of the gutter!) Luckily, my fall was cushioned by a plastic carton of arugula and a bag of rice noodles—for the PHO! 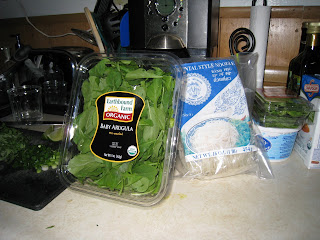 So I took one of my annual winter spills, and ended up with a bruised hand, hip and knee. But I didn’t cry this time! This can only be a sign that I’ve finally reached adulthood.

And finally, as promised, a selection of Student Journal Entries from Everyone’s Favorite Professor. This is my Christmas gift to you. Enjoy!

--"Mom picked me up and on the way to the Clarks she told me she might have lung cancer. She's not trying hard enough to quit smoking ... Anyway Halloween was good. I was a cereal killer."

--"I was just thinking today about one way that I changed since I've been in college. I don't hate gay people anymore...Most women like gay guys so they can hook you up fairly easy."

--"College would be so much better if an education wasn't involved."

--"Studying seems to pay off."

PS: I’m at the Debs again on Friday, writing about holiday traditions. Just in case you’re wondering where I am on Friday.

Susan has tagged me. I don’t know how I’m going to top the other time I did the Seven Random Things MEME (which actually turned into thirteen random things the first time I wrote it), because how do you top dino-turd ass bling?

You don’t, that’s how. But I guess if I squint really hard and imagine a world in which it’s possible for me to feel creative a week before Christmas, I would come up with these seven random things about me:

Next week, a special holiday treat for you: fall semester student journal entries from Everyone’s Favorite Professor! I can hardly stand it, I’m so excited. In the meantime, I will be figuring out how to use my new iPod and digital camera. (Whee! New-fangled architectural fancy machines!) Also, there are uncorrected galleys of Driving Sideways awaiting proofing on my kitchen table. (I know what some-body will be doing the day after Christmas!)

Well, They're Not Letters to Santa...

Dear WTCX: Poison’s “Unskinny Bop” is not a song. It is a handful of knitting needles perforating my eardrums UNTIL THEY BLEED.

Dear Family Member Who Shall Remain Nameless: I love you, but I’m sorry, this year the obscure penny that costs NINE HUNDRED DOLLARS will not be under the tree.

Dear elderly woman walking out of Copps with a sad little Walgreens bag over the cast on her left foot: Aww!! You kind of broke my heart, just a bit, with your scrappy ingenuity.

Dear 1938 version of A Christmas Carol: you never fail to crack me up when over-eager Tiny Tim has this to say about the shiny, plump Christmas goose: “I’d like to stroke it!!!”

Dear Maddie: that adorable nephew of mine can prank call me anytime he wants.

Dear highly attractive salesman in the Verizon mall kiosk: I saw you digging that pinkie finger in your left ear, and I saw you smell it immediately afterwards. You’re not fooling anyone in that suit, Mister Hot-n-Disgusting.

Dear “Bags” arcade game at a certain tavern in northern Wisconsin: I give up—how does one play a virtual game of beanbags? I suppose it helps to be drunk on battery acid and lighter fluid, but…virtual beanbags? Does anyone play this? Does anyone really say to his friends, “Hey, how about a rousing game of BAGS?” (For future reference, the correct answer to this question is, “Hey, how would you like to be shoved down a flight of stairs in a pair of burning rollerskates?”)

Dear stack of still-unwritten Christmas cards on my kitchen table: You’re a pain in the ass I’ve been putting off for weeks, but without you, how would I have discovered this old gem among my address labels? 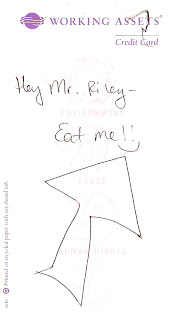 This is the top of my note, left on the counter one morning
to indicate my desire that Mr. Riley eat a slightly overripe banana (to which the arrow points). 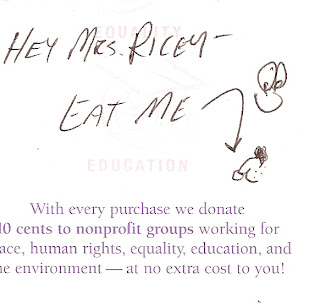 Mr. Riley's response, at the bottom of the note. The banana was not eaten.
PS: The recipe for the Chocolate Peppermint Pinwheel Cookies can be found at the Food Network website. Yes, they are worth the effort. All hail the mighty Alton Brown!!!

I’m at the Debs this Friday writing about my number one hero. And no, it isn’t Ferris Bueller.
Posted by Jess Riley at 10:21 AM 26 comments:

Yesterday I turned another year older, and one of the best birthday gifts came as a complete surprise to me in the form of an email from my good friend Mary. Subject line: “OHMYGODOHMYGODOHMYGOD!” Turned out that she discovered I now have my own Amazon page! Please excuse me if I Squeeeeee! just a bit here. Now, I am not the squeeing type: I am less the cheerleader, more sit in the back of the class and make like Tom Servo during lectures. (Speaking of Toms: Tom Schrauth? Wherever you are? They just don’t make in-class snarkmates like you anymore.) I am less Debbie Boone, more Weezer. Especially when I go running in winter. I am far, far less Sorority Girl, and far, far more Hey look, a riot on campus! Let’s join it. That seems like a responsible thing to do, doesn’t it?

Anyway, after skipping and leaping down my office hallways like a leprechaun, I had to show each of my colleagues my brand-spanking new Amazon page. And then I “Squeeeed!” some more for good measure, and then the intensity and pitch of that Squee made my head explode into thousands of tiny rainbows.

I have this habit of not really investigating myself online, because I’m terrified of what I’ll find. I attribute this to my discovery that a hooker in Las Vegas has beaten me to the web domain for my full name. So once in awhile people will say to me, “Hey, did you know Jen Lancaster mentioned you on her blog today?” Or “Hey, you’re on Books-a-Million!” Or any other exciting tidbits, and my reaction is, WOWEE! Zipedeedodah! And I very nearly become a cartoon caricature of myself: Obtuse Girl, and Her Little Dog Shitzalot!

Anyway, that’s the exciting news. Here’s something else: after much (tardy) deliberation, I have selected two of Mrs. Chicky’s awesome inmate name suggestions for the next book: Lincoln Kennedy and Leslie Johnson. My mother contributed two more, but they’re top secret. Shhhhhhhh….

And now, if I may be serious for a minute (pausing to clean glasses on shirt, lost in thought, before putting them on while I frown slightly). It is now December 4. I have exactly 20 days to purchase and wrap gifts for everyone on my list; mail gifts to my Fairy Book Godmothers in New York; make Christmas cookies (chocolate peppermint pinwheels and almond star-thingies); write out and mail cards; select, install, and decorate a tree; write a grant proposal; participate in an office White Elephant gift exchange; learn to spin plates while hula-hooping on a giant ball; and sell my soul on eBay to the person who will do all of these chores for me.

Is it weird that I remember what was on TV when I made my pinwheels last year? (Some sort of bizarre sci fi time travel movie about plants taking over New York City. Poor choice, Ed Burns. I also remember thinking, ‘How is it possible that I’m actually watching this right now? What feat of nature has kept my eyes trained to my television screen for two hours of such sheer crapitude?’) A marathon of Reno 911 was on while I decorated the tree, and if you’ve stuck around here since Christmas 2006 (bless your little hearts), you already know I’m still scarred from watching Deliverance while decorating our family tree back in 1980-mumbletysomething. Hmmm…maybe I should rent A Clockwork Orange to set the mood for this year's tree shenanigans.

I am NOT making scones again, and I am NOT buying Tom & Jerry mix. If I start making noises like I have a hankering for a Tom & Jerry, like I really want nothing more than hot water mixed with ersatz eggnog-flavored frozen goo and booze, please wave an open bottle of nail polish remover beneath my nose until I come to my senses.
Posted by Jess Riley at 8:28 PM 23 comments: