My House is Some Old Sh*t

Just popping my head up from the pile to feed and water the blog.

We saw Patton Oswalt at the Pabst Theater this past Saturday. My shoulders have been generally scrunched up around my earlobes for the past few stressful months, so it was good to relax and laugh so hard my abs waved the little white flag. Folks, you don't need the Ab Circle Pro or any of that expensive ab-working shit that ends up under a pile of laundry in the back of your closet. You just need to get yourselves some tickets to see Patton Oswalt and then laugh 'til you puke.

While you're at it, rent his last film, Big Fan. Even if you're not a huge sports fan, you probably know someone who is ... it's not a ridiculous slapstick or mainstream comedy, and it's actually quite dark and frequently tragic. A Dramedy. A tragicomedy. Whatever you call it, you'll probably like it.

Other films recently seen and enjoyed: Moon, The Cove, Whip It, Collapse.

Moon made me want to be a better person, challenge myself more in my own storytelling (which currently consists of convincing myself that restaurant calories don't count) ... maybe take up astronomy in retirement.

The Cove ... ah, I'm still eviscerated from that one. There's a reason why this is one of the nominees for Best Documentary at the Oscars. It made me cry, it pissed me off, it made me want to do something.

Whip It. Have you seen this? I dug it! Girls rock, and so does the soundtrack.

Collapse made me want to buy some guns, build a bunker, and learn how to make my own soap (not necessarily in that order). If this guy's right, basically everything we worry about today will be something we'll miss worrying about in the not-too-distant future. If we're alive. (Yeah. It's a comedy. Not really.)

Life continues to be crazy-making, but busy is good. (God, I feel like I'm writing an overdue letter to a distant relative. Could I BE any more generic?) Well, okay, here's something: it seems my nephew has discovered his tootyacker, which is always a treasured milestone for any toddler's parents. The extent to which we may need to remodel our house before selling is also beginning to dawn on us ... especially since we just learned that our house was built in 1885. 1885. Yes. 125 years ago. That 1885. The "Layers-of-lead-paint-on-the-walls-under-the-horsehair -plaster-and-lath" 1885. The "Civil War has only been over for twenty years" 1885.

No wonder I always find strange little artifacts when I garden in the backyard. People have been laughing, crying, paying bills, dancing, sleeping, reading, eating, pooping, doing it, arguing, celebrating holidays, cleaning, discussing politics, and cooking in my house for 125 years.

I knew I was forgetting something.
My brain is too deep-fried by grant proposals at the moment to write anything pithy or entertaining, so guess what? Yep! It's going to be a salad-spinner of a post. Let's see what splatters onto the bowl:
Have another cookie, dear! An extensive British study finds that young children who are regularly looked after by their grandparents have an increased risk of being overweight. They are also prone to tantrums when it's time to return to The Land of Joyless Responsibility and Chores.
WE Gave You a Heart Attack First! The owner of the Arizona-based "Heart Attack Grill" is suing the owners of "Heart Stoppers Sports Grill" in Florida, accusing them of stealing his idea for a heart-attack-inducing menu. If you weigh 350 pounds or more, your quadruple-bypass burger (one patty for each procedure), lard-soaked fries, Jolt cola, and unfiltered cigarettes (yes, you read that right) are FREE at the Heart Attack Grill. I can't help but feel this is social Darwinism in action. But this has the wheels in my head turning. Maybe diners could wear Snuggie-inspired hospital johnnies to protect their shirts from spills?? And with the poor circulation this diet is sure to encourage, perhaps send patients--er, patrons--home with a few tabs of Viagra? And why stop with heart attacks? Why not serve beverages (OJ laced with PCP and aged for three months near a nuclear waste dump) in triple BPA-lined cans, with a spritz of Malathion for flavor? The possibilities are ENDLESS!
.
Miscellany: The movie Moon was amazing, my mushrooms were delicious, and my friend Lilli ("Lee") has a new book out (Donor Girl...check it out!). Finally, I'll be announcing a book giveaway from a GCC guest by the end of the week. Ciao for now! 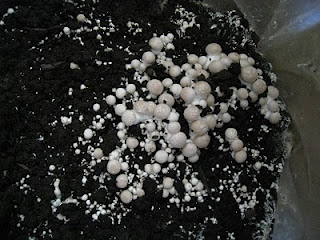 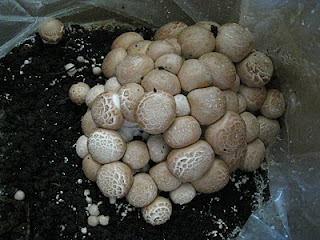 One day later. They doubled in size again over the next 24 hours, at which point I hastily harvested and made culinary plans for my bumper crop. 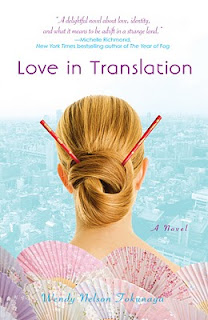 I am still back-logged on my GCC posts (forgive me!!), so here is another post long-overdue, for the fabulous Wendy Tokunaga. I had the privilege of meeting Wendy a few years back at the San Francisco RWA conference, and she is just as lovely as she is talented. Without further ado, let me present Wendy's sophomore novel, Love in Translation:

For anyone who’s ever dreamt of finding love and family in an unexpected place...

After receiving a puzzling phone call and a box full of mysterious family heirlooms, 33-year-old fledgling singer Celeste Duncan is off to Japan to search for a long, lost relative who could hold the key to the identity of the father she never knew. Once there she stumbles head first into a weird, wonderful world where nothing is quite as it seems—a land with an inexplicable fascination with foreigners, karaoke boxes, and unbearably perky TV stars.

With little knowledge of Japanese, Celeste finds a friend in her English-speaking homestay brother, Takuya, and comes to depend on him for all variety of translation, travel and investigatory needs. As they cross the country following a trail after Celeste's relatives, she discovers she's developing "more-than-sisterly" feelings for him, although his mother seems to have other plans for her son. But it is when Celeste learns a Japanese song called “The Wishing Star” that things begin to change for her in ways she never expected, leading her to ask, what is the true meaning of family? And what does it mean to discover your own voice?

Praise for Love in Translation:

“A delightful novel about love, identity, and what it means to be adrift in a strange land. This story of a search has an Alice in Wonderland vibe; when Celeste climbs down the rabbit hole, one can't help but follow along.”
—Michelle Richmond, New York Times bestselling author of The Year of Fog

“An amusing story of one woman's quest for her father and the improbable path of love.”
—Meg Waite Clayton, author of The Wednesday Sisters

1) Now that you are published, what (if anything) have you changed about your writing routine?
Now I have to find the time to sit down and actually write! It’s very easy to get caught up in marketing and promotion with Twitter, Facebook, etc. and I can easily spend hours on it. Often the only writing I’m doing is email, press releases, and Q&As. I have to discipline myself to set aside the time to work on my third novel. And be sure to turn off email!

2) Do you listen to music while you write?
Sometimes. Especially if I’m writing about Japan, I’ll listen to some Japanese popular music. But most of the time I like to have silence when I’m writing.

3) Have you found that as you've developed your writing and story telling skills, you watch movies or read books “differently?”
Definitely! With books it’s often difficult to just read for pleasure as I’m too busy paying attention to what the writer is doing technically with plot, character development and motivation, prose selection and everything else. I find it hard to get lost in a book and it has nothing to do with the writer—it’s my hang-up. The same goes for movies. I’m always on the lookout for plot holes and character inconsistencies and I sometimes drive my movie-going companions crazy with my too in-depth analyses. A lot of time the reaction is, “Gosh! It’s only a movie!”

4) What vacation would be most inspiring to you as a writer?
I’d love to go to a writers conference in some interesting place and then have the time to vacation in the locale.

Thanks, Wendy! I'll be back next week with my chilifest recap.