The Freaks Come Out At Night

I have been engaged in fierce battle this week with the Taliban of bugs. They are crafty. They are nocturnal. They will stop at nothing to achieve their evil exoskeleton ends. I’m talking about earwigs. If you have never seen an earwig, you have the luck of the Irish, who, if you think about it, really weren’t all that lucky (historically speaking). You are also blissfully unaware of what is living behind your toilet tank.

I first noticed something was wrong when I saw that the leaves of my freshly-planted bee balm were skeletonized down to the stems. However, a quick survey of the area turned up no bug-like culprits. I decided to sneak out that night with a flashlight to identify the source of the leaf-mangling.

I collected my flashlight and tromped across the yard, which took me less than three seconds since my yard is the size of a Chiclet. I aimed the beam of light at the bee balm, and the pizza I’d eaten earlier for dinner did a little kick-ball-change in my stomach.

The plant was barely visible beneath the squirming, shiny brown mass of insects, chomping away like they were at Golden Corral after a week-long fast. “Oh my god,” I said, my voice soft but tinged with terror at the Stephen King novel that had taken up residence in my new flowerbeds. Horrified, I aimed the light elsewhere. There they were, teeming on my sunflower seedlings! And here too, skittering over the purple coneflowers! And glistening in the delphinium buds, appraising me with their cold bug eyes, antennae twitching! And infesting the Joe Pye Weed, eating ragged holes through 85% of the leaves! The next thing I said out loud was this: “Oh my god, I can hear them!” Because I could. They sounded crispy. My entire garden was snapping, crackling, and popping like a cement mixer chock-full of Rice Krispies and milk. 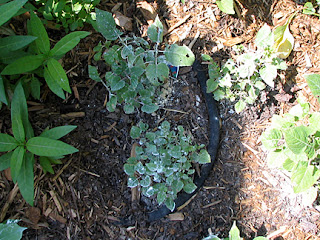 The shredded remains of my bee balm. That white stuff is diatomaceous earth, one of the weapons in my arsenal. Note the untouched Tropical Milkweed at left. Those earwigs are pretty fuckin' selective.
What to do, what to do. Well, dance around all freaked-out saying, “ohmygodohmygodohmygodgrossgrossgrossgrossgrossgross.” That was the first thing I did. My next course of action was to spray the teeming masses with a blast of insecticidal soap, which I just happened to find in the garage. Step three: manually knock visible leaf-chomping earwigs into a bowl of soapy water. Yes ladies and gentlemen, I actually HAND-PICKED many of them. Step four: sprinkle diatomaceous earth around the base of my plants. Step five: leave earwig traps (shallow containers half-filled with vegetable oil and soy sauce) in strategic locations around the yard. Step six: wash hands until they are raw. Lie in bed paranoid that there are earwigs tunneling through your hair.

Repeat nightly because you spent a lot of money on these plants and are too cheap to replace them. Also because you are a tenacious bastard, and when you go to war, you’re in it to win it.

I’m making a dent in the population, but it’s an extremely unpleasant routine. See, these are the kinds of things they don’t tell you when they say, “Garden organically! It’s neat! It’s safe! Wheeee!” If I didn’t have such an aversion to killing bees and butterflies and contracting a horrible form of cancer, I’d spray my yard with a cloud of pesticide that you could see from space. 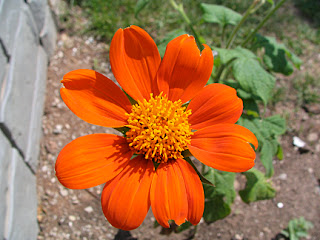 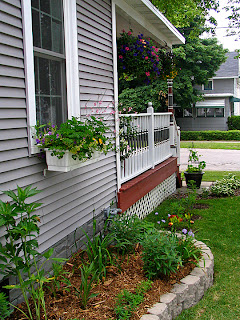 One view of one of the new flowerbeds. Brand-spankin' new, folks. Before this, there existed only mega-weeds and a sorry excuse for a lawn. 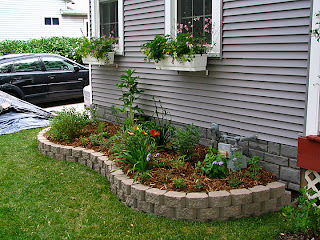 Another view, same bed. The windowboxes are new, too. That black tarp in the background is covering the bodies I mean TOPSOIL. 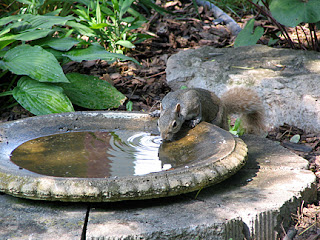 One of the many squirrels that frequent our backyard. We also have a tailless squirrel with impaired motor skills and a terrible skin disease. He tips over constantly while nibbling sunflower seeds. The other day I saw him twitching on the sidewalk; I thought he was having a seizure. As I came closer he got up and scampered away. Turned out he was just lying on his side, munching an old bit of crabapple.
Posted by Jess Riley at 10:34 PM