*tap tap tap* Is this thing on? 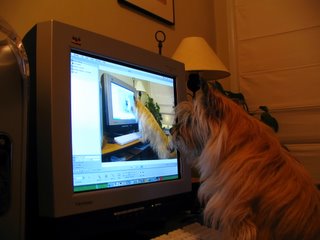 A blog is born. I'm not sure what shape this will take in the coming months, but I hope to share my thoughts on several topics that may or may not interest you:

1) The road to being published. After a bajigitty agent rejections for my "practice" novel, it seemed I'd never see my name in print on anything other than bills and solicitations from the American Cancer Society. So I kinda threw in the towel. I focused 180% on my day job (grant writing) and took a deep breath. It felt good to quit daydreaming. In fact, it was almost like that scene in Singles where Bridget Fonda's character finally decides Cliff is a jerk. How refreshing to get my life back! I would get so much accomplished at work! Sure I could learn to love words like "utilize," "overarching," and "facilitate." I could even learn to love and describe a nebulous process called "quasi-experimental evaluation," the contemplation of which is rumored to have caused tremors and uncontrollable weeping in lab rats.

But a funny thing happened on the way to my thirties. I *gulp* missed writing! It's true what those darn authors say. Writing is in your blood. Those pushy bastard characters start running around your head, demanding you give them histories and motivations and conflict and a pet guinea pig and a rent-controlled apartment in the city and crap like that.

So here's what happened. A quirky girl named Leigh popped into my head; she'd had a kidney transplant and wanted to take a road trip. Who was I to argue? I finished Riding with Larry Resnick this September. While it was still a work in progress, I entered it in two contests: the James Jones First Novel Fellowship and the "Get Your Stiletto in the Door" competition sponsored by Chicklit Writers of the World. Entering these contests turned out to be the best decisions I ever made in my life, other than marrying my darling husband and buying my Cairn Terror, Daisy. (Yes, that's an intentional misspelling.) 600 people entered the JJ fellowship, and I made it to the top 8. Finalist! Yessssss! And I placed first in my category in the Chicklit contest, with a manuscript request from both the agent and editor final judges. People. Let me tell you. Contests (legitimate ones that is, research carefully) rock the hizzouse. On Edit--you can find me & the contests here: the James Jones one and the Chick Lit one.

I subscribed to Publishers Marketplace, located the agents that had sold to the editor who requested my full manuscript via the contest, and composed my query letter. Of 8 queries sent, I had 4 requests for the full. An offer of representation was made. Two offers were made. A third agent, still reading, indicated strong interest. A few days later, I made a decision that just felt right and signed with Laura Blake Peterson at Curtis Brown. Yippee!!!!

The book is now under consideration at five houses, and I'm apoplectic. I am limp with anxiety. My face is breaking out. But this is good. I have gotten farther than I'd ever imagined I'd get. And I'll keep you posted on these developments.

Oh yeah. The other topics.

2) The weather. So we cheeseheads had our first major storm of the season last night. New England gets "Nor'easters," so I think we should get "Midwe'tners." Whatchall think?

3) Food. New favorite: Sabra's roasted garlic hummus. You like garlic? You love this hummus. Look for it in a dairy case near you.

4) TV, movies, music, miscellaneous. This post has gotten way too long, so I'll leave the rest for another night.