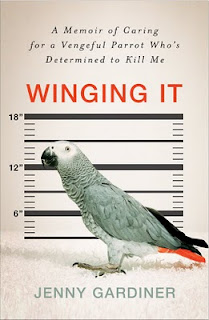 I had the privilege of being a Deb in 2008 with the hilarious, lovely, and talented Jenny Gardiner, and I'm so excited to showcase her new laugh-out-loud & touching memoir, Winging It: A Memoir of Caring for a Vengeful Parrot Who's Determined to Kill Me (available next Tuesday, March 16, from Simon Spotlight Entertainment).

About the book: Like many new bird owners, Jenny and Scott Gardiner hoped for a smart, talkative, friendly companion. Instead, as they took on the unexpected task of raising a curmudgeonly wild African grey parrot and a newborn, they learned an important lesson: parrothood is way harder than parenthood.

A gift from Scott’s brother who was living in Zaire, Graycie arrived scrawny, pissed-off, and missing a lot of her feathers. Every day became a constant game of chicken with a bird that would do anything to ruffle their feathers.

The old adage about not biting the hand that feeds you—literally—never applied to Graycie.

But Jenny and Scott learned to adapt as the family grew to three children, a menagerie of dogs and cats, and, of course, Graycie. In WINGING IT, Jenny vividly shares many hazards of parrot ownership, from the endless avian latrine duty and the joyful day the bird learned to mimic the sound of the smoke detector, to multiple ways a beak can pierce human flesh.

Graycie is a court jester, a karaoke partner, an unusual audio record of their family history, and at times, a nemesis. But most of all, she has taught the family volumes about tolerance, going with the flow, and realizing that you can no sooner make your child fit into a mold than you can turn a wild parrot into a docile house pet.

WINGING IT reminds us of the importance of patience, loyalty, and humor when it comes to dealing with even the most unpleasant members of the family.

“Graycie is as much a part of us as we are of her. Sure, she might be feisty at times. But who isn’t? Whether she’s yelling at the dog or answering the phone or bobbing to the beat of the kids clapping for her amusement, she’s one of us. Our parrot, petulant or not, is a member of our family for the long haul.” -Jenny Gardiner

Watch an interview with Jenny, see a list of upcoming appearances, and read the first chapter on her Simon Spotlight author page. On to the interview!

1) Now that you are published, what (if anything) have you changed about your writing routine? Far, far less to to write now. So much attention has to go to publicity and marketing that writing almost seems a luxury now.

2) Do you listen to music while you write? If I am at a coffee shop, I always do (unless I get distracted and simply MUST eavesdrop on a neighboring table LOL). At home I generally don't, unless the kids are home and have some vile MTV show on, in which case I totally have to zone out from that with tunes.

3) Have you found that as you've developed your writing and story telling skills, you watch movies or read books 'differently?' I should say yes to this but I don't. I guess I'm not that kind of learner (is that kinesthetic? No, I think maybe I'm kinesthetic, learning by doing, rather than visual learner). It doesn't sink in one iota. LOL

4) What vacation would be most inspiring to you as a writer? Just to recharge my battery, I would do well to have a fabulous week or two lounging on a catamaran in the British Virgin Islands. My dream vacation. But I'd also love to set a novel in Italy and immerse myself somewhere--anywhere!--in Italy for a while.

5) What is one of your strangest / most quirky author experiences? Oh lordie. My very first book signing, I had a very bizarre Charles Manson lookalike vagrant come into the bookstore with a watermelon beneath his armpit and beeline over to me (wanting my freebie Hershey's kisses), then feign interest in my book (Sleeping with Ward Cleaver, as if that was something he would read!) . He then picked up one of my business cards, flipped it over, and proceeded, with very jittery hands, to draw a strange illustration that I thought at first was a set of breasts (thank goodness not!) . Never speaking a word, he finally handed it to me and I gladly gave him some kisses (of the chocolate variety!) so that he and his watermelon would go on their merry way.


Thanks Jen! Congratulations on the release of WINGING IT. To wrap things up, here's a short video of Graycie (I LOVE this bird!)...now, I'm off to pre-order a few copies.