I have mixed feelings about pulling The Hovel off the market. On the one hand, we won’t have to worry about where to stash the dog when realtors tour strangers through our freshly cleaned, sparkling-spotless house.

On the other, we won’t return home after realtors have toured strangers through our freshly cleaned, sparkling-spotless house to find what appears to be a giant, black pube on our white couch.

On the one hand, the most entertaining people in the neighborhood have been evicted or actually died—including our Hoverround-bound penis-splitter. Can you believe that? He really died! He hadn’t walked in ages, wore an adult diaper, chain-smoked, appeared to eat only fast food, and told us last August that he was diagnosed with a brain tumor and would be dead by November—but come on. I never thought that guy would die!

On the other, we still have Probable Pedophile who buys a case of beer at the corner liquor store every day, precariously balancing it on his lap as he peddles past our house—and no doubt more colorful characters will move into Hoverround’s old house as soon as it’s ready for rent.

On the one hand, I still won’t have room to plant a Big-Ass Garden or read in the backyard in private. And even though my city just approved urban chickens, my yard is still too damn small to get even one tiny silky Bantam I could name Checkers and train to peck “What a Feeling!” on a toy piano.

But on the other, there is a pear tree one block from me that bears the most delicious fruit. How do I know? Because one night, while walking home from a bar down the street (shut up—a friend had his 40th birthday party there), I stole a few pears from their yard. I justified this because they were already on the lawn and probably would have just gone to waste.

Yes I ate them, and yes, they were delicious.

I need a moment to absorb the fact that I just publicly admitted to eating fallen fruit I stole from somebody’s yard.

Now that we are staying put, J and I are mentally preparing ourselves for some major remodeling projects on the second floor. The ultimate goal is to re-list the house in a few years and not have potential buyers shouting, “Mother of God, what is this abomination!” and sprinkling themselves with holy water when they see our second bathroom.

Also, to stop weeping in the shower because it is. That. Gross.

In happier news, the squirrels are nesting in the chimney again! I know because I can hear the rustling behind the bathroom wall while I’m curling my hair. Last spring I looked up one day to see five babies tumble out of the chimney, scamper across the roof, and leap into the nearest tree.

J is not as enamored with the squirrel babies as I am, but he is kind enough to indulge me and let them raise one more brood before he climbs up on the roof and fixes the chimney blocking-thing. He allows this because: A) he has a huge heart; B) they are not getting into the wiring, and any destruction they are wreaking behind the walls can be no worse than the bathroom’s current state; C) they are not rats; and D) he is married to someone who will cry over profiles on Petfinder or Adopt-us-kids, and he is not a fan of celibacy. 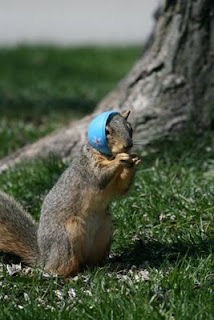 This is not one of our baby squirrels, but one that somehow ended up wearing a plastic Easter egg bonnet near the school my brother teaches at. See? Totally cute!