I Can't Believe I'm Posting These

After living in the same house for 16 years, J and I thought it was finally time to seize the day and buy that house in the country we’ve dreamed of. With a garden! Fruit trees! A chicken coop! Maybe even room for more than two people to eat in the kitchen! 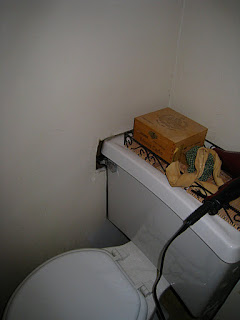 Somebody once thought this was a good idea.
A toilet that isn’t stuck in the wall!

This photo may one day make its way into one of those “shit rednecks cobble together with duct-tape and gum” photo montages, but you saw it here first, kids.
So after attempting to sell our house for six months last year with ZERO offers, I am convinced that our bizarre walk-through, haphazard, dangerously not-up-to-code bathroom is to blame. 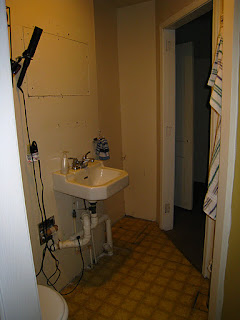 Can you believe I used to clean this room? Who did I think I was fooling?

I know, I'm as surprised as you. I mean, who DOESN’T love squishy walls and exposed PVC piping that appears to have simply been jammed into the wall, where it molds and rots and incubates and emits funky smells and you can fall asleep to the relaxing sound of the grody faucet dripping, because your bed is just eight feet away?

J and I took advantage of a recent loan sale at our credit union, sucked it up, and decided to bring our 125 year-old house into a safer, more hospitable state. Preferably something that wouldn’t give my four year-old nephew nightmares, rashes, or asthma when he comes to visit.

Living in a house with ample, code-safe electrical outlets and an actual bathroom vanity is a prospect that excites me to no end. Did you hear that? An ACTUAL bathroom vanity! On which I can set my toothbrush without gagging or grimacing! Be still, my beating heart.

While this work is being completed, J and I are living on our first floor. I suppose we could sleep in this— 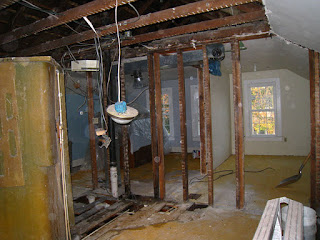 But I may lose 60% of my lung capacity and end up with the sooty face of a character featured in a Dickens novel. So, futon-behind-a-sheet it is for the time being. I am also doing my hair and makeup in the same chair in which I wrote my last novel, and the dog eats and drinks four feet from the pillow I sleep on every night.

Nonetheless, I am still finding a way in the midst of this chaos to do some fall baking, because I’ll be damned if I have to bid farewell to summer AND miss out on recipes featuring pumpkin, cinnamon, squash, and sage. (Mmmm, pumpkin-ricotta lasagna ... I think it's the lead paint dust that gives it that spicy, piquant flair.)

Last night I baked a caramel apple cake (averting tragedy when I remembered just a minute after I put the cake in the oven that I’d forgotten to add an entire stick of butter… "Why is this batter SO DRY?!”) It’s my mother-in-law’s birthday today, so it’s actually for her—so, Happy Birthday if you’re reading this, Mama Riley! You take the cake!"* But first we’ll take you out for dinner to celebrate.