More Home Reno, Before and After

Last year was a big year for remodeling at our house. In the winter of 2011-12, we gutted our second floor and rebuilt it from the studs up, moving walls and creating a bathroom that didn't make guests recoil in horror.

Then, because we hadn't yet had enough, we took on two more projects last summer. I haven't posted the Before and After photos yet (something about a book release and five grants due in a few weeks or whatever), but I'm finally getting around to it.

As some of you know, our house was built in 1885, long before things like electrical and plumbing codes or symmetry and safety existed. Our primary entrance does not lead you to a foyer, because that would make too much sense. Instead, you open the front door and land right in the kitchen. Which has FIVE doors: to the back hall, upstairs, downstairs bathroom, the porch, and the living room. When we finally tackle our kitchen remodel, this will actually make our job easier, because there's only so much room to put new cabinets when you have five freaking doors and two windows in a small room shaped like a box.

But back to my story. So you arrive at my house. The first thing I used to say when I took your coat was, "Welcome to the hovel!" The second thing I still say is, "She only pees when she's really excited. Sorry about that."

When you turn to your right, you enter the living room, which until last summer looked like this (minus the furniture): 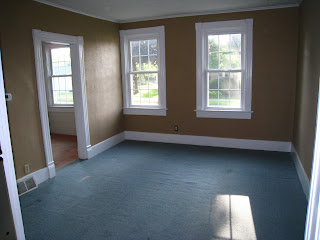 Teeny-tiny. And don't you just love the blue carpet? It was probably installed in the early seventies--a used remnant from some shagadelic van. When it got really humid and hot in summers, it would smell like moldy, rotting death. 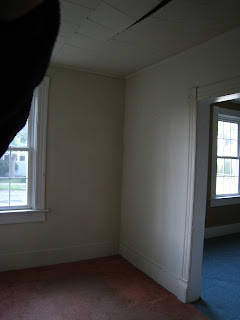 This used to be my office. Without the desk, you can get more of a feel for the delightful, stained orange carpet, which was a nice contrast to the blue in the adjacent living room.  I don't know what that big black blob in the upper left-hand corner of the photo is--it's either my thumb, or the ceiling finally caving in. Last winter I was showing some friends a funny video on the computer in that room--the video of the mullet guy playing "Careless Whisper" on sax? Anyway, at one point one of them looked up and asked me, "Uh, is this safe?" I honestly had no answer to that. We're all lucky to be alive. 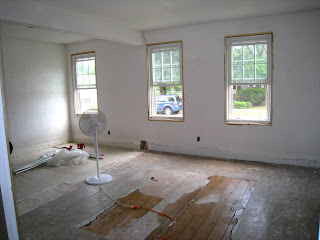 In May, the contractor who'd worked on our second story emailed again, offering a deal if we had a project for him. Did we ever! Let's start by tearing up the carpet (put your gas masks on) and blasting the wall out between the living room and office. Don't forget to fix the ceiling! We took everything down to the studs again--all new plaster. So purty. 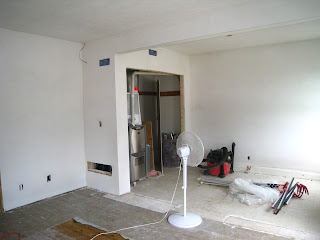 Did I mention we don't have a basement, so our furnace was in a little closet in the old office? Oh well, no basement means no flooding! And no place for J to arrange his ugly beer can collection! 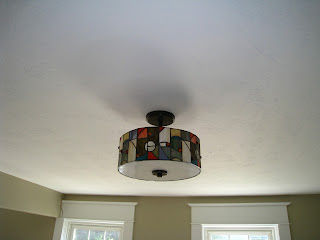 Things are progressing. Look, new window trim, paint on the walls, and a fun light fixture! Also, holy damn am I sick of painting! 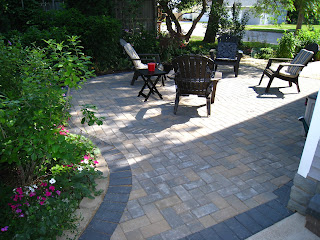 At the same time, we hired a crew to dig up our backyard and install a patio. There's pretty much no lawn to mow now. 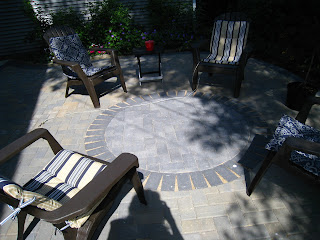 I read Gone Girl in the chair in the upper right-hand corner. 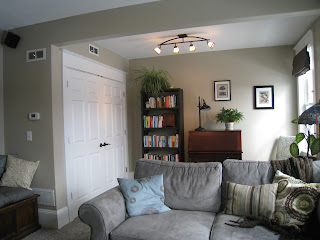 And here's the living room After. No more blue or orange carpeting! 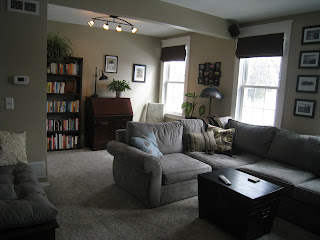 This couch is the best ever. J's already making impressive progress on his Indent. 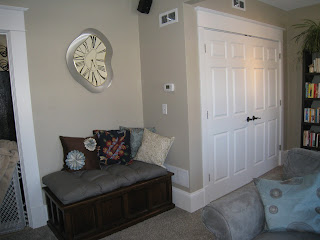 My old Hope Chest, which my Dad used to call my "Hopeless Chest." My Godfather made it for me out of pews from the church in which I was baptized. (Sidebar: Isn't "pew" a funny word?) 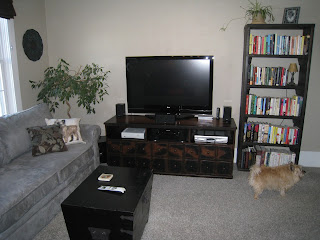 Still trying to figure out what to hang over the TV. Daisy is barking at her Nemesis in this shot.

Maybe next year we'll tackle our kitchen and downstairs bathroom--the only two rooms in the house that have yet to be touched. And boy howdy do they need help! The floor beneath the toilet is squishy, and it's so close to the oven you can watch garlic bread brown under the broiler if you pee with the door open. *Pukes*  Also, the linoleum has more peaks and valleys than Appalachia. Also, Daisy used to snack on it as a puppy. So stay tuned. This house, like life, is always a work in progress.
Posted by Jess Riley at 11:38 AM

Email ThisBlogThis!Share to TwitterShare to FacebookShare to Pinterest
Labels: before and after photos, home remodeling, living room, patio