Oh, I Don't Know What to Title This One. Happy August First, I Guess.

Overheard at My Sister’s Baby Shower:

On a handmade stuffed “Fuggly” doll: “Does that thing come with rolling papers?”

On something his mother did to make him blossom: “Stuff Miracle Gro suppositories up my butt.”

On politics, in mixed political company: “I ran for city council, and I LOST TWICE! Because everyone in my town is a FRIGGIN’ REPUBLICAN!”

On our scintillating assortment of games: “No, I don’t really want to play.”

On the Fuggly doll again, while sitting next to my Grandma: “I used to smoke a LOT of that stuff!”

Grandma, on the range of baby gifts: “Socks, again?”

Later in the evening, at our second event of the day (I know! It’s like the life I always wanted was finally delivered), I saw that another partygoer had brought a black bean and corn salad. Immediately, I grew clammy and agitated. This was not part of the plan. And when we deviate from the plan, things happen in my cranium that are just not pretty. Brain cells start smashing into each other like mini car wrecks, and dials and meters are just spinning wildly like in every movie about a nuclear plant about to melt down. You see, we had all arranged, via email, what each guest would contribute. Marty had the bacon covered in cheese, Ed had the cheese and pea pasta salad, and some people I don’t know brought the dilled cheese curds. (Are you sensing a theme here?) And I, Jess Riley, was slated to bring the black bean and corn salad to tickle palates and alleviate any cheese-related binding.

People, this is my signature dish. Katherine Hepburn had padded shoulder pads. Audrey Hepburn had pearls. I have black bean and corn salad and very regular BMs.

Immediately, I tried the competitor. And I’ll admit no shortage of smugness in my voice when I told my new BFF Michelle (Hi Michelle!) that the non-Jess Riley salad was mealy and bland, whereas mine was crisp, juicy, and swimming in enough garlic to leap from real life to film and kill Gary Oldman in every copy of Bram Stoker’s Dracula ever made.

I fielded numerous requests for the recipe, which I fake-modestly agreed to share. So I present to you, dear readers, for the first time ever: Jess Riley’s Secret Signature Summer Salad & Salsa. Delicious with Tostitos Scoops. Dangerous competing with my version.

Serves: Oh, I don’t know, depends how piggish everyone is.

In a small jar with tight-fitting lid: Mix lime juice, olive oil, garlic, salt, and spices. Cover and shake until everyone’s getting along swimmingly.

Introduce the brine to the players. Refrigerate overnight, bring to the party, peel off the cover to release a garlic-scented cloud, sit back, drink a margarita, scratch a mosquito bite, and collect the compliments like trading cards. Pretend to be modest, and tell them Jess Riley sent you. 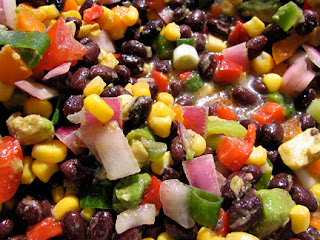 I have a lot to learn about food photography.

Meanwhile, back at the monarch ranch: 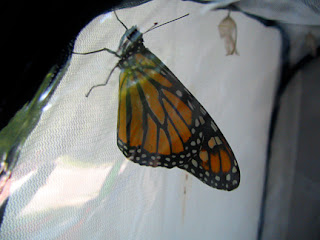 As of today, I have released 4 fluttery, delicate monarchs into the sunny skies. 3 were girls, and 1 was a boy. And guess what? Now I have empty nest syndrome! Well, it’s not empty nest so much as “Empty Giant Mesh Bag” syndrome. Here’s Darcy, all grown up. I almost hit her with my car a few hours after I released her. She really should fly a little higher. Fly to the light, Darcy! Find Carol Ann! Fly to the light! 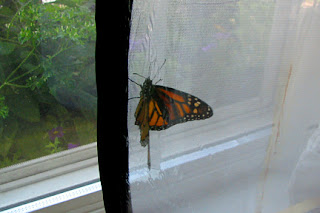