Today I had lunch with an old friend of mine—my roommate from Artsworld. (If you’d like to learn more about Artsworld, this magical gathering of nerds from around the state, I wrote about it on May 17, 2006. Yeah, I couldn’t make a functional link to the exact entry. You have to scroll down.)

Anyway, lunch was fantastic, and a nice break from my existential weekend, particularly Sunday, a portion of which was spent with my family at my grandmother’s assisted living facility. My Grandma Dot is a vibrant, spunky 88, and it pains her a great deal to be stuck with a herd of deaf, forgetful, cataract-ridden old farts. My grandma still loves to flirt and dance and crack jokes, but most of her fellow residents…don’t. As we visited in the sunroom, a hunched-over man named Glenn cautiously pushed past with his walker, and Grandma Dot said, “Glenn. GLENN! This is my family. My family came to visit me.”
Glenn turned his head two degrees to the left in the time it might take a talented construction crew to erect a skyscraper. He was non-plussed, to say the least, sparking Grandma’s ire. Her good mood collapsed and she frowned. “Oh, you don’t hear me.” She adopted a mocking, sing-song tone and started snapping and shaking her fingers at him. She nearly stuck her tongue out at him; in fact, I think she did a little. “You old coot, you don’t hear, you’re all blah-blah-blah. Put your hearing aid in.”

Glenn seemed to know he was being made fun of and shook his head (in the time it might take for a civilization to rise, thrive, and fall), resuming his glacial trek to his room. Grandma was frustrated. If she could have punched Glenn in an age spot, she would have. “He has hearing aids, but he won’t wear them!” she vented to us, completely perplexed that her peers have allowed Age to make them her bitches. She crossed her arms, put them on her hips, refolded them across her body. And at this point, her eyes filled with tears.

The image of some of the more rutabaga-like residents slumped in chairs in the dayroom still fresh in my mind’s eye, I leaned over and whispered to my mother, “Good lord, this place is depressing as hell.”

My mother whispered back, “This is why your father and I are driving over a cliff.”

“Yeah right, you’ll be aimlessly tooling around in your beige Buick, looking for a cliff, unable to find anything but a gently sloping hill. And you’ll coast slowly down it and collide gently with a child’s backyard playset.”

Grandma shed more tears when we got ready to leave, and there was an endless waving good-bye from the sidewalk until our car disappeared beyond the horizon. We all remarked at how hard it was to see Grandma so sad.

I remember thinking, Christ, I don’t want to get old.

I’ve been on a major health-kick lately (even shunning onion rings and a turtle sundae on Saturday), working out, taking my vitamins, eating right. As we visited with Grandma Dot, still healthy, an orphan and a widow watching more friends and children and siblings die than anyone should ever have to, it occurred to me: why the hell am I taking such good care of myself? I don’t want to be the last one standing, wondering who will fill my dance card, holding conversations with turnips that don’t remember what I said five minutes ago, missing my long-dead loved ones, feeling alternately despondent and annoyed by forced group activities facilitated by an activity director named “Tuba Dan.”

I sometimes hear people say, “I only want to live ‘til ninety (or beyond) if I have my health and I’m still mentally sharp.”

Well, most things sound great in theory.
But gosh, look at this: 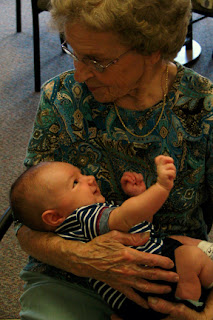 There are things that can make almost anything bearable.
Posted by Jess Riley at 7:09 PM