I can’t even believe Thanksgiving is over already. Um, Father Time? Could you please stop SPRINTING into the future? I’m missing all the good stuff! For example, I missed some of the best conversations before I even got to my parents’ house.


Despite now having an adorable new grandchild to dote on, a source of continued dismay for my mother remains the fact that my younger brother now lives in Chicago. He is not going to move back to Wisconsin ever, not even if extended a personal invitation by the mayor of Kewaskum, not even for a complimentary auto air freshener shaped like the Burger King’s crown. Yet this doesn’t stop my mom from trying to finagle his long-awaited and triumphant return to Beerbratistan. But deep down, even she knows that her only son would rather live in a nest made entirely from Dog the Bounty Hunter’s hair than move back to Wisconsin. Thus, she also actively campaigns for the simpler and more attainable goal of increased visits from him. Which leads us to the first memorable weekend conversation:

My mother, perfectly healthy and still-looks-only-forty-she’s-so-young, to my brother: “Well, at least you’re home now. I don’t know how many more Thanksgivings we’ll have together, because I’ll probably be DEAD soon.”

Jake: “You could always come visit me, too. Do you know that you and Dad only visited me twice since I moved to Illinois?”

Mom: “Yes, but the time we helped you move counts as two visits.”

Jake: “No, it doesn’t! I still think you should come visit me more.”

Mom: “But Jake, we don’t know how to FIND you down there!”

The second memorable conversation occurred between my darling husband and me, after I caught him staring at me with a goofy grin on his face while parked in the Culver’s drive-through lane:

“Do you know you have the thinnest upper lip? You have like, no upper lip!”

“No, I’ve never noticed that in my entire life! Thank you so much for pointing that out.”

He began to laugh.

“Cut it out!” I vainly attempted to puff-up my skinny lip, which is difficult to do without punching yourself in the face.

J continued to laugh while ordering his turtle sundae at the magi-techno-tinny-talkie box. We pulled ahead and he flipped the dome light on to count out the change. I spotted a worker staring at us from the cashier station and became suddenly paranoid about my unshowered, slovenly state. I was wearing an outfit that could have easily been accessorized with a stolen shopping cart full of garbage. My hair looked like it had been regurgitated by a cat and then combed with a tree branch. It was so filthy it had its own listing on hotels.com for tiny pigs. In fact, my hair was so thoroughly grubby I wouldn't have been surprised to find a small matchbox car up on blocks near my bangs.

J continued to count change for his sundae ($4.19 plus tax).

“Oh my God!” I hissed, “He hasn’t looked away for like, thirty seconds.”

J looked up and nodded toward the staring cashier. “Oh him! He’s just wondering what happened to your upper lip.’”

This was a take-off from a conversation we'd had earlier in the week, in which I overheard Jason laughing—shaking in silent, hysterical laughter, really—at me while I wrote out bills. When he wiped away the tears and could breathe normally again, he explained: “Did you know you make funny shapes with your mouth when you concentrate? You smile, and then you purse your lips. You smile, and then you purse your lips. Like this.” He proceeded to demonstrate. I proceeded to put a bag on my head.

So, from me and my weird lips to you and yours, Happy Post-Thanksgiving. 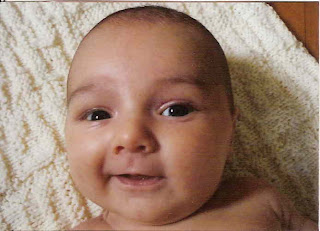 Edited to add: I'm at the Debs this Friday the 30th, blogging about family pets. Stop by and say 'hi' if you're so inclined!