Aunt Selma & Patty-ing it up in "My Vacation Slide Show"

We've been back from Victoria, BC for a few days, and I still feel keyed-up. It was absolutely jam-packed and amazing, and the highlight of it all was reuniting with my birth father & sibs and meeting a slew of wonderful aunts and uncles and cousins I've never met in person before. So much happened that I don't quite know what to share, so I'll let my camera winnow the chaff and direct the show. 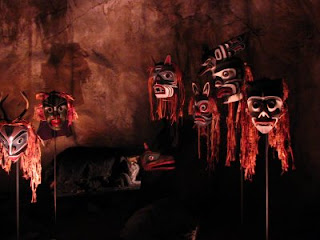 These funky, freaky, fantastic masks were hand-carved by a local tribe, on display with the Royal BC Museum. The museum was featuring a traveling exhibit from the British Museum, including a mutilated statue of the god Eros. 'Mutilated' because its head, nipples, and genitals had been scratched off by early Christians. Which had the odd effect of making me feel much less guilty for not going to church in a very long time. 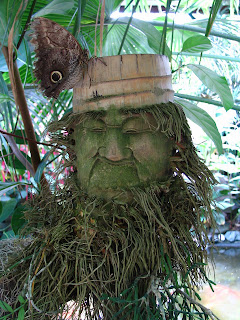 J and I are such tourists. Of course we had to go to the Butterfly Gardens, where we took far too many shots of this moth perched on a crabby face. The highlight of this outing (for me) was meeting a tourist from New Zealand who was beyond excited to see an animal she hadn't seen since 1975. And what was this exotic animal of the new world? A chipmunk. 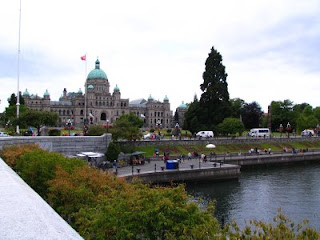 My excellent host and uncle told us that this was not Parliament, but the BC legislative building. Sadly, I missed the lesson in Canadian politics that was shared later, but J informed me it was all very confusing. 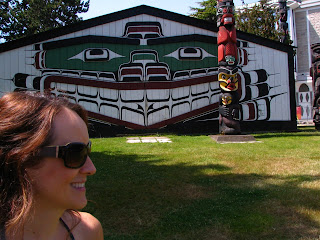 I'm standing before some amazing native totem poles, and I'm probably grinning like a dolt at some lady walking a puppy. Also, this was around the time I kept hearing a cuckoo-like cheeping from the trees near me, and carried on and on about "What bird is that!?" and "I can't wait to see what that bird is!" only to find out later that the cheeping was coming from the streetlights to serve as a guide for visually-impaired pedestrians. Safe to walk. Also, safe to assume I don't get out much. 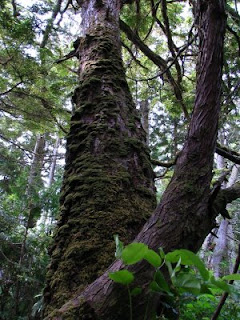 J proves beyond the shadow of a tall tree that he is a much better photographer than me. 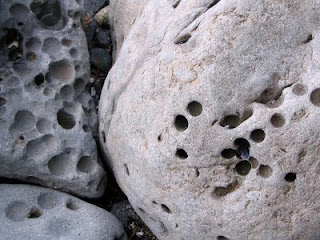 Here, too. This totally reminds me of the Peanuts' Halloween special. We'll call this one, "I got a rock." 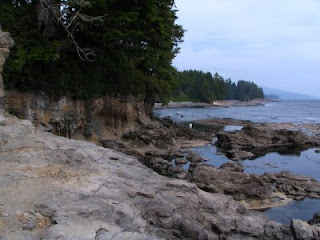 Tidal pools. If you're on a budget and you live in Wisconsin, you can get a slightly similar effect on the north shore of Michigan's UP, on Lake Superior. Minus the tides and the briny ocean scent, and it helps if you squint.

Thanks to fabulous hosts Dan & Karen, and to J's awesome parents for watching Daisy. I was so happy to hear she only peed on your floor once.
Posted by Jess Riley at 7:43 PM