So Saturday we went to a friend’s wedding reception, which was lovely. Everything about it was lovely, except my hair, because India’s monsoons were blown off course this weekend and made landfall on my head, and also in a multi-county area in southwestern Wisconsin. The Governor declared a state of emergency, and now I’ll never get these flashing orange highway barrels out of my hair.

Here’s another thing that wasn’t so lovely about it: I ate corn on the cob in public. Yes! Voraciously, too. Because at one point I happened to look down at my chest (which, I’m not really all that prone to do at random intervals, as it’s pretty much a straight view to the ground; my sister was born with all the interesting topography in the family) so anyway, I glance down at my chest and am HORRIFIED to discover that my corn-on-the-cob ingestion has been so enthusiastic that I actually sprayed starchy juice all over the area where a bib or nice medallion should have gone. Just call me Typewriter Teeth.

Oh, but that wasn’t the least lovely part of all. Later that evening, droplets of corn juice still glistening on my chest, tidbits of kernel likely lodged in my molars, I stepped up to a live microphone with two pals (one new, one old, both likely annoyed) to sing every word from Don McLean’s “American Pie” to a hapless crowd of strangers who are now probably in line at the audiologist, still openly weeping. Later, I launched into a toneless rendition of Aretha Franklin’s “Think.” I should have taken her advice before publicly shaming myself in such fashion.

I won’t bore you with the rest of the evening’s details; let’s just say they involved Burger King, hydroplaning, a wrong turn or two, and yes, multiple colors of wine, I’m sure you’ll be shocked to hear.

But my goal today is to share a cherished childhood memory with you, as captured by the magic of Kodachrome. May I introduce to you 3-D Night--1982? 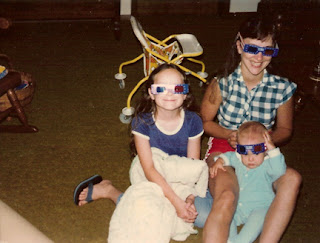 Please don’t adjust your monitors; that spectral glow truly is the color of my forehead. My mom, brother, and I are about to watch The Creature from the Black Lagoon scissor-kick into our living room courtesy of these stylish, cutting-edge cardboard spectacles I brutally forced upon my family in a fit of second grade despotism. (The side-effects of vertigo and blindness were only temporary.) I especially like the wacky yellow rolling high-chair that I seem to be wearing as a hat.

This Friday I’ll be posting at The Debs. Could be a great kick-off to the last full weekend in August, but I’m not making any promises.
Posted by Jess Riley at 3:43 PM