Invasion of the Body Snatchers

Thursday night I raised that ruckus I was telling you about at the Appleton Public Library, and my gracious host recorded it for future posting as a podcast on the library website. Later that evening, when I told my mom about it, she said somewhat skeptically, "What is that? A podcast. I don't know what that is. I don't even know how to get on a pod!"

Saturday was my nephew's first birthday party. Here he is picking out his favorite present. 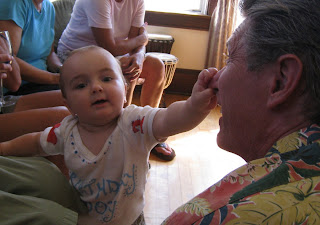 Later, after gifts were opened and summarily ignored by the boy-child in favor of the packaging in which they came, we shared a delicious meal prepared by my future brother-in-law. There was cake, of course: a delicious carrot cake that was moist and dense and chewy and I had to fight an urge to steal four pieces and shovel them furtively into my face in the corner. And the best part? He didn't follow a recipe. So everyone was raving about that fact, and he modestly replied, "Well, I cook eight hours a day at work, so after awhile it's just instinctive."

My mother lit up and contributed, "And if any of you ever end up in prison, I can compute your release dates for you!"

It's important to have talented relatives.

I turned to my mom and said, "Mom, I'm totally going to blog about that."

It's even better if they give in to the whining of their grown children fairly easy.