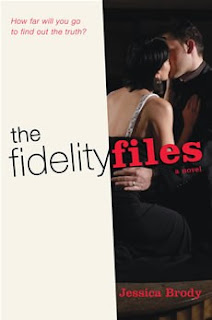 Today I'm pleased as punch (how pleased can punch be, you ask? Plenty, I reply!) to present Jessica Brody, author of The Fidelity Files (St. Martin's Press, June 2008). Jess interviewed me for her other site (Free Book Friday) about a month ago, and is just an absolute sweetheart.

About the Book: The Fidelity Files (Jessica's debut novel) hit the Denver Post bestseller list as the number two bestselling paperback in Colorado last June. Now she’s aiming her sites at the global book market with a recent release in the UK and upcoming releases in France, Germany, the Czech Republic, Russia and Taiwan.

The provocative novel strikes a sensitive chord in readers, telling the story of a charismatic, young woman who goes undercover as a “fidelity inspector” to test men’s loyalty.

Jessica recently flew to London to promote the November release of the book’s UK edition (published by Random House UK) which debuted in WhSmith’s (one of the country’s leading booksellers) top 100 bestselling paperbacks list. The title continues to sell across the pond, gearing up to outperform even the American release.

The Fidelity Files confronts the thorny issue of infidelity head-on with its controversial main character Jennifer Hunter. Operating under the code name “Ashlyn,” Jennifer leads a double life. Her friends and family all think she’s an investment banker who’s too busy to date. In reality, Jennifer is hired by suspicious wives and girlfriends to test the faithfulness of their partners. Her job has made her pretty cynical about her own love life. But just as she’s ready to swear off men forever, Jennifer meets sexy, sophisticated Jamie Richards, a man who might just pass her fidelity test. However, before she retires her secret agent self forever, she takes on one last assignment – a job which will permanently alter her perceptions of trust, honesty, and love. 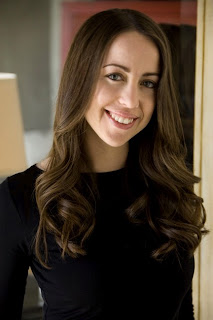 A gripping story of one woman’s quest to come to terms with her past, find her future, and—most of all—rediscover her faith in love, THE FIDELITY FILES was chosen as one of USA Today’s hottest summer reads and has recently been optioned for television. St. Martin’s Press and Random House UK have already purchased the sequel (yet untitled) to be published in the fall of 2009 and Jessica has recently sold two young adult novels to Farrar, Straus & Giroux.
Juicy! Congrats on your successes, Jessica...Well-deserved. She graciously provided a peek at her behind-the-scenes habits below:
1) Now that you are published, what (if anything) have you changed about your writing routine?
I hate to say it, but I tend to procrastinate a lot more now than I ever did before I got published. I think there’s something about that desperation for a book deal that keeps you on track. Now, I just find so many other things to do. It’s really bad! In terms of actual writing, I think I’ve definitely grown as a writer since I got published and I’m learning to trust my instincts more when it comes to what is working and what isn’t. I used to fight that voice inside that says, “This scene really sucks,” convinced that I wasn’t experienced to know what I was talking about. Now, when I hear that voice, I listen and start pounding on that delete key.
.
2) Do you listen to music while you write?
I am so envious of people who listen to music while they write. Something about that just feels so poetic and wonderful. For me, on the other hand, it had to be absolutely silent otherwise I get all flustered. Plus, whenever I listen to music, I tend to really focus on the lyrics and the meaning behind the songwriter’s message, so clearly you could see how this would interfere with my ability to form a sentence. In fact, I tried to turn on music when I set out to complete this interview, but that idea went out the window pretty quickly.
.
3) Have you found that as you've developed your writing and story telling skills, you watch movies or read books 'differently?'
Oh my gosh, DEFINITELY! I am the worst person to watch a movie or television with. Just ask my boyfriend. I sit there and tear things apart. Especially story development. And I’ve found that I have a certain knack for completing character’s sentences when we watch TV. I guess when you write dialogue for a living, you start to get a sense of where other writers are going with their dialogue. I’m sure it’s terribly annoying. I’m actually surprised my boyfriend is still with me.
.
4) What vacation would be most inspiring to you as a writer?
Well, I’ve always wanted to rent a house on the beach in Hawaii and write there. There’s something very glamorous and romantic about writing on the beach. Although, I have to say, if I did have the funds to be able to pull that off, I doubt I’d get much writing done!
.
5) What is one of your strangest / most quirky author experiences?
Hmm…this is a tough one. The only thing I can think of is how I tend to be psychic when it comes to knowing when my agent is going to call. She claims I have a sixth sense about that. Like I’ll send her an e-mail inquiring about the status of something just as she’s receiving a phone call with news. It’s really weird. She calls it psychic, I call it desperate writer syndrome.
~~~
Thanks, Jessica! Her award-winning book trailer follows:

I'll be back on Monday night, after I've recovered from Thanksgiving a bit.
Posted by Jess Riley at 7:15 PM