I don't know how it happened, but I got way behind in my author guest-touring commitments.* So today I am presenting Kelly Parra, now promoting her second novel, Invisible Touch. 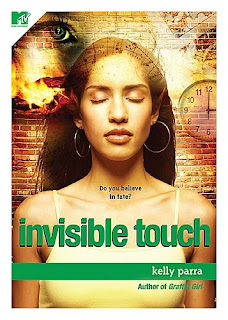 About the book: Kara Martinez has been trying to be "normal" ever since the accident that took her father's life when she was eleven. She's buried the caliente side of her Mexican heritage with her father and tried to be the girl her rigid mother wants her to be. Not even Danielle, her best friend at Valdez High, has seen the real Kara. Because Kara has a gift -- one that often feels like a curse. She sees signs, visions that are clues to a person's fate, if she can put together the pieces of the puzzle in time. So far, she's been able to solve the clues and avert disaster for those she's been warned about -- until she sees the flash of a gun on a fellow classmate, and the stakes are raised higher than ever before. Kara does her best to follow the signs, but it's her heart that wanders into new territory when she falls for a mysterious guy from the wrong side of town, taking her closer to answers she may not be able to handle. Will her forbidden romance help her solve the deadly puzzle before it's too late...or lead her even further into danger?
~~~

And now for the author Q&A with Kelly:

1) Now that you are published, what (if anything) have you changed about your writing routine?
I used to write whenever I felt like it. There would be weeks when I wouldn't write at all. Now I can't go more than a day before I itch to write or the current WIP is calling to me.

2) Do you listen to music while you write?
Funniest thing, I never used to. Silence was fine with me, until I got my iPod and was able to make playlists that I enjoy. Now my music can really set the mood I need for a particular scene.

3) Have you found that as you've developed your writing skills, you watch movies or read books 'differently?'
I used to be able to watch a movie and just enjoy it! Now I babble to my husband about ordinary world, conflict, and journey. LOL. He just nods his head and tunes me out. Books, I can still manage to lose myself in, but every once in a while I'm nitpicking a choice for a description or how I would have wrote a scene. I annoy myself.

4) What vacation would be most inspiring to you as a writer?
Actually, just the outdoors inspire me. I'm closed off to the world so often that I lose connection to my basic sensory of vision, scents, and touch. I can get inspired by going to the beach and taking the atmosphere in.

5) What is one of your strangest / most quirky author experiences?
I'm not sure, but overall I think readers or some people I've come in contact with have a strange perception of authors. That maybe we're eccentric or moody. I'm just a regular gal and sometimes people are shocked by that. :) Thank you for having me on your blog, Jess!
~~~
Doesn't Kelly sound like a real sweetheart? Best wishes with the book!

I am returning to pilates class tomorrow after a six month hiatus, so I'll report back late Thursday night. (I'm sure to pull or bruise something.)

*I suspect this is because I am LAY-ZEE.
Posted by Jess Riley at 2:16 PM