Nuts to You, FDA! 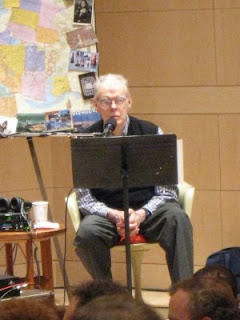 Doesn't Jim Packard look pissed? Like, 'Why is that a-hole taking my photo' pissed?
Well, I didn't make it onto the quiz, but we enjoyed ourselves nonetheless. On Sunday I did a little shopping, and I think I set a new record for unexpected spending in Target. I walked in with two things on the list (dish soap and face cream) and left with a cart stuffed with $300 in goodies, including a new duvet, bed skirt, and delicious sheets that will be perfect for summer. 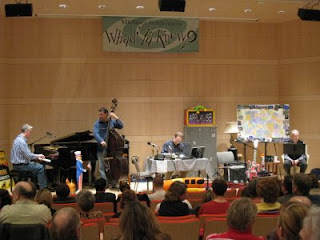 The Set of Whad'Ya Know. We were slaves to that applause sign and loved every second of it.

Then I bought the most delicious pistachios in the world. I can't remember the producer, but they were "Salt & Pepper" flavored, and we inhaled them while watching Jim Gaffigan's new stand-up special. And when I say "inhaled," I really mean "inhaled." I swallowed one whole while laughing; there was a brilliant moment where I could have coughed it back up with much fanfare, or simply swallowed it in hopes that it would eventually find its way through to the other side.
My mental process went something like this:
Uh-oh, choking alert! Whole pistachio-in-shell at back of throat! Swallow or Cough? Swallow or cough!?
This Jim Gaffigan special is pretty hilarious. If I cough, I could miss some funny things. But if I swallow the pistachio whole, it might get stuck in my intestines and block my next few meals better than a pair of Blublockers blocks....uh, the color blue.
Ohmygod, which Bush choked on a peanut? Or was it a pretzel? That was pretty hilarious. At least I'm in the comfort of my own home here.

It all happened pretty fast and that nut went down large and in charge. And today I read that it will probably give me salmonella.

Tainted nuts. Again. FDA, why must you rain on my parade? Here is a healthy snack my husband loves and is willing to consume in vast quantities. So what do you do? Declare it tainted. 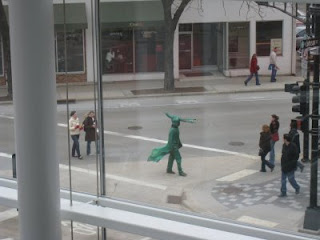 This photo was taken from the second story of the Madison Museum of Contemporary Art looking down on State Street. Yes, that is some dude wearing a pterodactyl costume. Every so often a gaggle of girls would run by, screaming, and he'd give chase. I'm not sure what it signified. Either they were promoting an upcoming theater performance, or this is how they like to spend their Saturdays. Dressing like a pterodactyl or running from a dude dressed like one.