Updates and a Long Overdue GCC Post for Carleen Brice

General Stuff Update: I lost much of the week to The Omnivore's Dilemma, which I started reading on Tuesday and am about to finish. HIGHLY recommended to anyone who eats. I'd read (and geeked out majorly on) Fast Food Nation, which I had signed by Eric Schlosser himself at a reading in Madison a few years back...so I thought I knew a few things about the life cycle of french fries and hamburgers (and how they may not be so conducive to supporting OUR life cycle), but Michael Pollan delves even further, covering so much more territory, in Dilemma. And whoa, can the man turn a phrase.

Cat/Bunny Conundrum Update: Tuesday, the day after the bunny incident, the orange "cat came back...the very next day." Grrrr....This time, I had a pet carrier ready. He readily came to me when I called (friendly little sucker--hard to believe he was such a killer), and I herded him into the carrier. Success! I then called the Humane Society, which dispatched a Community-service Officer to fetch Kitty and return him home with an admonition and citation for absent city cat license.

I haven't seen him in the neighborhood since Tuesday, and my fingers are crossed that his owner keeps him indoors. Because if I wanted a friendly, wildlife-killing cat in my yard all day, I'd get my own. I don't know how the baby bunny is doing, but I'm keeping my fingers crossed.

Okay! On to some long-overdue business. My author pal Carleen Brice is making the GCC rounds to celebrate her second novel, Children of the Waters, and I am excited to showcase her here today.

About Carleen: Carleen Brice’s debut novel, Orange Mint and Honey, was an Essence “Recommended Read” and a Target “Bookmarked Breakout Book.” For this book, she won the 2009 First Novelist Award from the Bla 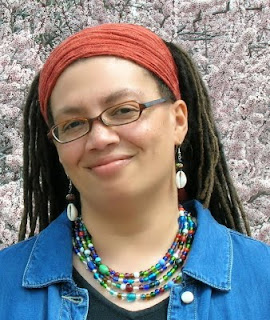 ck Caucus of the American Library Association and the 2008 Break Out Author Award at the African American Literary Awards Show. Orange Mint and Honey was optioned by Lifetime Movie Network.

Her second novel, Children of the Waters (One World/Ballantine), a book about race, love and family, just came out at the end of June. Booklist Online called it “a compelling read, difficult to put down.” Essence says, “Brice has a new hit.” You can read an excerpt at her website.

Meg Waite Clayton (author of The Wednesday Sisters) had this to say about Children of the Waters: "This moving story of two sisters separated by prejudice will open minds and touch hearts" and Jacquelyn Mitchard said, "I was exhausted and singing the blues the hour I began Carleen Brice’s new novel, CHILDREN OF THE WATERS. Five hours later, I’d finished this fresh, free-rein novel about mothers’ secrets and children’s sorrows and was shouting ‘Hurray!'"

Great teasers!! Let's move on to the interview:

1) Now that you are published, what (if anything) have you changed about your writing routine? Lately, I haven’t been writing as much as I’d like because I’ve been too busy promoting. For me it’s hard to do both, but I’m about to buckle down and get back to it.

2) Do you listen to music while you write? Usually, not while I write, but sometimes before I s 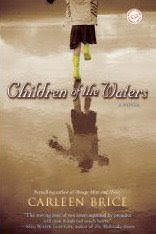 tart I’ll listen to get pumped up.

3) Have you found that as you've developed your writing and story telling skills, you watch movies or read books 'differently?' Definitely! It’s kind of a bummer because it’s hard to just enjoy a book or movie now. I get sucked into how & why the author, screenwriter, director did what they did.

4) What vacation would be most inspiring to you as a writer? ANY real vacation (meaning not going somewhere to sell books) would be great right about now! But I suppose as a writer, going to Paris and writing in a café would be very inspiring.

5) What is one of your strangest / most quirky author experiences? A woman emailed me pictures of herself and her daughter after reading my first novel ORANGE MINT AND HONEY, telling how well we’d get along and how we should be friends. I found it very strange.

Thanks, Carleen! Best of luck with your sophomore release...it sounds fabulous.

I'll be back next week with a few photo essay-ish posts. Have a large time this weekend!