I hope everyone had the kind of relaxing weekend you would pay good money for. Mine was the kind of weekend you might find at a rummage sale hosted by two surly, gassy bachelors. Well okay, it wasn’t so bad. I only say that because of what happened on Friday, which started out on a high note. I met two of my best friends from high school at a local restaurant famous for giant, fruity drinks that come in two classes: “Sneak-ups!” and “Gotchas!” (Wow, I really had to fight the urge to type: “rhinestone shades and cheap sunglasses.”) 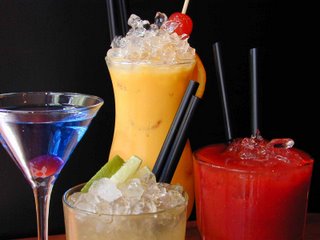 Anyway, I wasn’t in the mood for grape-flavored brain damage just then, so I stuck to beer. We shared a large basket of fried cheese products and some gossip about old classmates. It was one of those perfect nights where you start off jazzed-up about the sheer concept of going out with old friends, especially after your first drink because it’s been so LONG since you got a little crazy in public, but then after dinner you lean back in the booth, jiggle your tummy flab with both hands, think about your fluffy new duvet, and contentedly call it a night.

Things only got ugly later, when I barreled up the driveway too close to the house and sheared off the passenger side mirror of my car, which still has that new car smell on rainy days. I tried snapping the mirror back on, but no luck. It’s toast. Cost to replace? $90 plus an hour of my life lost watching Mad About You and Drew Carey Show reruns in the body shop waiting area.

Saturday I finished reading She Got Up Off the Couch and a cloud of self-loathing floated in and hung about my head for several hours. Self-loathing because I realized, upon finishing the book, that I was the kind of person actually capable of becoming a groupie. For a writer named Haven Kimmel. Later I listened to online archives of This American Life and opened my Riding with Larry Resnick file to make my first revisions.

Note to self: do not attempt to revise work after reading something that makes you feel devoid of talent and perhaps not even a speaker of the English language. Especially avoid doing so if you are buzzed on Red Zinfandel.

Sunday, a celebration of mothers. The giving of flowers and cards. The stuffing of my face with Papa Murphy’s pizza, brownies, cheese curds, and a delicious type of garlic cracker the likes of which I'd never tasted before. Later, after I’d sworn never to eat again, I found myself sitting on the couch watching Big Love with a spoon, a half-gallon tub of Reese’s Piece’s ice cream, and a jar of organic sauerkraut.

The cloud of self-loathing rolled right back in.

But back to one of my earlier points: if you’re not familiar with This American Life, I implore you to visit this site and check out a few episodes from the archives. I listened to "I Enjoy Being a Girl, Sort of," "Remember Me," and "Neighbors," which featured an interview with the irreplaceable Mister Rogers. Go. Listen. Enjoy.

PS: thanks to everyone who shared their concert histories. Not surprisingly, you all turned out to be pretty cool kids. Plus, some of your lists were gut-bustingly hilarious.
Posted by Jess Riley at 9:27 PM