Oh What a Wonderful World of Art

I’m going to do something very brave. Join me, won’t you, on a journey through time. Back to 1991. The year the Soviet Union officially dissolved, Nirvana released Smells like Teen Spirit, Dances with Wolves won the Oscar for Best Picture, Dr. Seuss died, and a million jokes about Paul Reubens were launched. I was sixteen years old, away from home for the fun-filled week of campfire singalong debauchery known as ... Artsworld.

Artsworld was a statewide summer arts program for high school students and as far as I know, it’s still hosted annually at a local college. You could be nominated to attend a variety of program strands, including music, dance, visual art, writing, scarification, and so on. I’d been nominated to attend the writing program by an English teacher, which came as something of a surprise since she’d done little beyond grunt in my general direction before that. Last night I came across some photos of the event, and I thought…why not share them with the world? 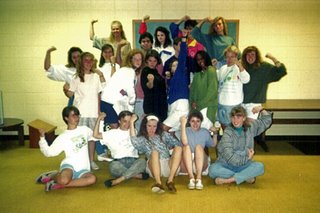 So here we have the entire writing group. Wow, what a bunch of creeps. Can you spot me? If you guessed, “The girl with the maxi pad stuck to her head, a horrid case of lockjaw, and ankles weeping for socks and a change of shoes,” you’re right! I’m thinking I chose the white headband because my forehead didn’t look enough like a satellite dish from 1983 without it. God, I wonder what’s happened to my fellow scribes. Who knows … maybe some of them blog! If I focus really hard, maybe they’ll get my message and do a Google search containing the terms “Artsworld … 1991 … Lakeland College … Bea Arthur … chicken in a bucket” and “hanging sneeze guards,” which was a recent Google search that led an unsuspecting restaurateur to my blog.

Let’s see…to my right was the resident science fiction writer. I’m pretty sure she was really 67 years old. Those tight-rolled, acid-washed jeans weren’t fooling me. To my left is Mary, the girl I shared a dorm room with for the week. Poor Mary had terrible allergies, so the thing I remember most about her was the constant nose-blowing and wads of Kleenex in her pockets. Behind me in the blue sweatshirt and white shorts is Megan from Whitefish Bay. Megan was tiny, cute, spunky, and athletic. Basically, she was all the adjectives I’d never see in print next to my name.

Her raised fist is concealing the cutest guy in the program. I don’t remember his name, but I remember a line from one of his short stories about a family member who was hung like a buffalo. The instructors hooted and raved about it, after they stopped arguing over the right way to write a novel (Male Instructor: "You must outline key plot points and character arcs! You must know your climactic event and denouement before you begin!" Female Instructor: "Just start writing and let the story unfold organically!" Me: "Shut up and let the cute guy talk about balls some more!")

I don’t remember much about the other people, but I do remember the name of the other guy in the class. Daniel. He's standing next to a girl from Cuba City (middle of the top row) who reminds me a little of Sara Vowell. Though her head is nearly microscopic, I think you can still tell she didn’t really have the "Geeks on 'Roids" spirit. 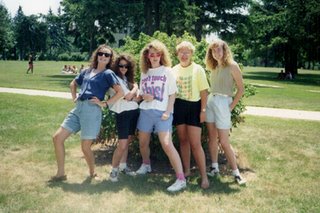 Large, unwieldy sunglasses? Check. Hair gelled and teased into misshapen helmets? Check. Shirts tucked in and then fluffed out for that flattering dumpy waist effect? Check. Long, ugly shorts held up with unnecessary belts? Check. Pasty white legs exposed at strange angles? Check. An idea as to the names of the blond girls on the end?

But the girl in the middle was one of my three Jodies. I befriended her because she was wearing a “Can’t Touch This!” t-shirt, which was something I looked for in a friend back then. Incidentally, if you can't tell which one I am, don't worry. Neither could my husband. But if he thinks I'm the kind of girl that would tuck a white t-shirt into black spandex bike shorts, he can sleep on the couch for awhile. 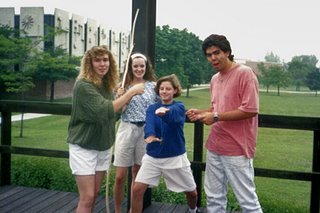 Here I am with Megan, Daniel, and a girl whose name escapes me. Oh, was Megan cool. Just look at her: she’s wearing a lanyard for God’s sake. I just learned what a lanyard is, like, two years ago. We are acting out a scene entitled, “Awkward teens that will never speak to one another after Artsworld.” Here’s how I imagine the scene unfolding.

Me: “What a great idea! I’ll get a stick. First, let me make sure my belt is holding my shorts up as high as possible. They’re almost up to my armpits, so we’re all set!”

Daniel: “And I’ll smear cryptic green symbols on my cheeks and chin, then hunch over and pantomime the time my Dad caught me reading a bad magazine!”

Blond girl: “I’ll tuck my green sweater into my white shorts and punch you in the face, Megan!”

Artsworld. Where creativity is nurtured, geeks commune, and photos you'll want to incinerate but instead post on your blog are taken.