It's Got a Good Beat but You Can't Dance To It

They say you can tell a lot about a person by the kind of music they like. I’m not sure who “they” are, but it’s best not to argue semantics with these kinds of sweeping generalizations. Because it would ruin my whole point here. So I thought it might be fun to list every single concert I’ve ever attended. Some of these pained me deeply to admit, but in the spirit of complete disclosure, I thought you should know what kind of geek you’re dealing with.

Let’s begin with the bands I’ve seen at county fairs and the like.

In the beginning, there was Joan Jett & the Blackhearts. The year was 1986. I wore a blue and white striped sleeveless sweater and acid-washed jeans that I had strategically ripped until they fluttered in a slight breeze. I went with my neighbor Sara and her boyfriend. He blasted Appetite for Destruction in his Camaro the entire way to the fairgrounds. The whole experience made me yearn for adulthood so badly I felt lightheaded.

I soon moved on to .38 Special. I’d never seen so many mullets and missing front teeth in my life. 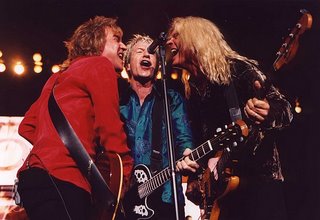 I had my very first “big concert” experience in 1990: Kiss, Slaughter, & Winger. We arrived late, but not too late for me to purchase an unofficial Slaughter t-shirt from the leg of some lady’s pants. It seemed perfectly natural to me at the time to buy clothing that another woman had stuffed down her pants. I guess Budweiser does that to you.

Tom Cochrane & Red Rider. Remember the “Life is a Highway” guy? That was him. Red Rider also did “Lunatic Fringe.” And let me tell you. Two hours is a long time to wait on wooden bleachers at a county fair grandstand until the band plays the two songs you know.

Eddie Money. God it hurt me to type that.

The Gufs. Oh, so handsome, young, and earnest. Oh so heartbreaking to run into my latest ex-boyfriend in the crowd as they played “Smile.”

Stone Temple Pilots. I think I saw them at Summerfest when I was in college. I say “think,” because those years are kind of hazy.

Green Day. I wore an olive t-shirt and hideous jean shorts with built-in suspenders. This was when "Long View" was popular, years before American Idiot. Which I was at the time for wearing pseudo-lederhosen to a concert.

Horde Fest 1997. Lineup: Beck (during the “Two turntables and a microphone” era), Primus, and … grandfather of grunge, Neil Young. From the sixth row, people. It doesn’t get much better than that.

Tom Petty and the Heartbreakers. In the words of Ed Sullivan, they put on a very good shew.

Jimmy Buffett. As I’m not a Parrot Head, I went because someone gave us some free tickets. I spent the first half hour of the show angry at my boyfriend for being stoned, so my best friend and I wandered around flirting with boys the rest of the night. 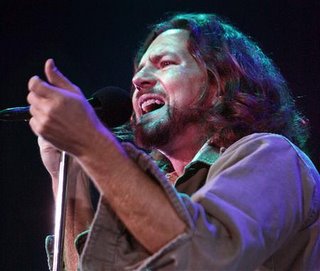 Pearl Jam. Another excellent show. Key memory: some drunk guy stuck in a tree on the hill behind us.

Red Hot Chili Peppers and the Foo Fighters. Dave Grohl did this hilarious stompy-thing with his skinny right leg while he sang & played guitar. From our vantage point in the nosebleed section, the exaggerated stomping made him look like a puppet made of pipe-cleaners. As a result, my friend Wendy and I laughed through his entire performance.

Ozzfest 2003. Lineup: Ozzy Osbourne, Pantera, Disturbed, and Godsmack (among others). When Godsmack took the stage a girl behind us said, “Ewww! This is music for thirty year old men!” Plus, there was a guy in front of us wearing frayed jean shorts, doing the stompy thing with his left foot during their entire set. So this ended up being another concert I laughed my way through.

Deftones. After their show I almost needed a Beltone.

Fear Factory. Reading this, you’d never guess that not only did I sit through The Notebook but I actually cried at the end. In all honesty, this one was for J. Because sometimes you have to take one for the team. The team being your, you know … marriage.

Uncle Tupelo. I’m getting older now. Can you tell?

Radiohead. Oh in the name of all that is sweet, holy, and delicious was this a fantastic show. I want them to come back to the land of beer, brats, and cheese so badly even my toes hurt. I feel like Rose floating on the door in the North Atlantic after the Titanic sank, crying out hoarsely to Radiohead: “Come back! Come back!”

Wilco. During their show Jeff Tweedy’s kids wandered around the audience with their nanny. They appeared to be between the ages of 3 and 6 and wore oversized earphones to protect their hearing. Adorable. Jeff Tweedy sang a beautiful song about his wife and afterwards he laughed a little and said, “Wow. I just totally blew a booger onto the microphone.”

I’ve probably forgotten a few, but this paints a graphic enough picture, I think. As I've gotten older my tastes in music have changed. Now, these bands on the upcoming Summerfest lineup have piqued my interest: My Morning Jacket, Keane, Andrew Bird, Panic! At the Disco, Guster, Aqualung, Yellowcard. And I am trying to organize a trip to Chicago this August for Lollapalooza.

So. Now it’s YOUR turn. Please, please, pretty please with Splenda on top tell me your concert list. That would make me the happiest girl in the world wide web.
Posted by Jess Riley at 5:21 PM