I only have two weeks 'til I have to return to work, so yesterday I decided to capitalize on my waning opportunities to relax by reading in the backyard. I brought Daisy out to keep me company and hauled out a lawn chair before discovering that a house sparrow had gotten stuck in our birdhouse. More specifically, just its HEAD was stuck in the hole, and every so often it would beat its wings frantically in a futile bid to extract itself.

This disturbed me deeply, though I despise house sparrows. I specifically chose this nestbox because it had a 1.25 inch entrance, designed just for wrens and chickadees. Since house sparrows are a very populous non-native species that are particularly vicious to other cavity-nesting birds, I didn't want to give them an opportunity to spawn in my yard. Thus, the smaller hole on the birdhouse. And thus, the bird with its head stuck in the hole.

Human intervention appeared necessary. So I called Jason at work. "Can you come home?"

"There's a house sparrow stuck in the birdhouse. Will you come home and pull it out?"

"I can't! I'm totally busy. You're just going to have to put on some leather gloves and rescue it."

I didn't want to see it suffer, even though I didn't really like the thing. So I fetched a step stool, put on some thick gloves, and marched over to the birdhouse to attempt my rescue.

"Hey there little birdie," I whispered. I stood on the stool and gently wrapped a gloved hand around the bird's body. I pulled just a bit, but nothing. No give at all.

"Rats." I opened the side hatch on the nest box and peered inside. The bird's beak appeared stuck somehow, so I fetched a stick and kind of tried to loosen him a bit.

I don't think the bird liked that very much, because a stream of fear pee trickled from its bum. The poor little thing was panting like mad, his eyes glazing with that glassy panic-stare. This wasn't going well.

"Hang on, sorry, okay, just one more minute," I said, reaching over to try and pull again. The bird beat its wings, aimed its rear at me, and jettisoned a ribbon of bird shit straight at my face. I screamed and fell off the step stool.

"Well, screw you bird, you're on your own!" I tossed the gloves onto the lawn. "You got your head in, you'll just have to figure out a way to pull it out again." I indignantly settled down on my lawn chair and read Rolling Stone for a bit. After another ten minutes or so, the bird popped out on his own and flew away. That or I dozed off and a hawk swooped in and gobbled him up. Either way, it was a happy ending, in my eyes. 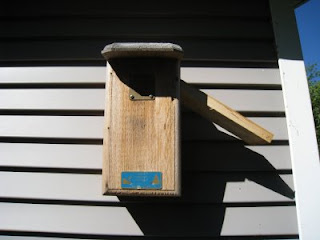 The scene of the crime. Ominous shadows and everything... 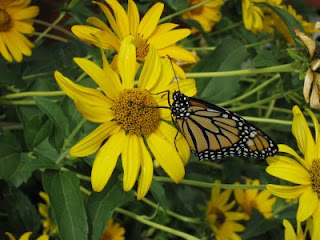 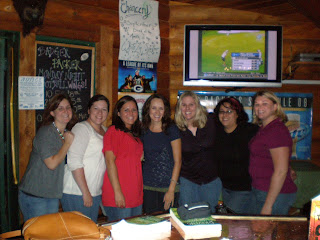 And the happiest picture of all. Look at this lovely book club that invited me to meet with them!