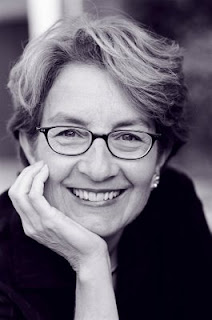 Today my guest on the GCC is novelist Roberta Islieb, who is blog-touring to promote her newest release, Asking for Murder, out now from Berkley Books.

About ASKING FOR MURDER: When psychologist/advice columnist/sleuth Dr. Rebecca Butterman's close friend and fellow therapist Annabelle Hart is found beaten and left for dead, Rebecca is determined to help search for answers. But this time, no one wants her help. Not Detective Meigs, who thinks the crime was either a botched robbery or the result of a relationship gone sour. And not Annabelle’s sister, who makes it clear that Rebecca isn’t welcome in family affairs. The only place where her opinion matters is the therapist’s couch.

Rebecca's agreed to see Annabelle’s patients while her friend is hospitalized, but it won’t be easy. Annabelle’s area of expertise is sandplay therapy, which Rebecca knows little about. While she studies the images in the patients’ sand trays and puzzles through Annabelle’s family secrets, another victim is murdered. With a killer on the loose, she can only hope the clues in the sand are buried within easy reach.

Praise for the Book: “Asking for Murder is a charming and sometimes gritty mystery with an appealing protagonist who sleuths, cooks and psychoanalyzes.” --Marilyn Dahl, Shelf-Awareness

About Roberta: Isleib is the president of National Sisters in Crime and the past president of the New England chapter. Her books and stories have been short-listed for Agatha, Anthony, and Macavity awards. Isleib's advice column series debuted in 2007 with DEADLY ADVICE and PREACHING TO THE CORPSE. A clinical psychologist, Isleib says the work of the detective in a mystery has quite a bit in common with long-term psychotherapy: Start with a problem, follow the threads looking for clues, and gradually fill in the big picture.

Roberta was kind enough to participate in my interrogation; by now, you know the drill, so let's begin the waterboarding! I mean questioning!

Writing is not optional any more! Since this is my eighth book, it's a little hard to remember when it was optional...All that means I have a page count goal that I set each week in order to meet my publisher's deadline.And since missing a deadline seems unprofessional, I'm pretty good at keeping up. Another way to say it: Writing is still my passion, but now it's my profession too!

Can't listen to anything! Right now we have some builders working on finding a leak--bang, bang, yak, yak, and rock music. I may have to repair to the town library... 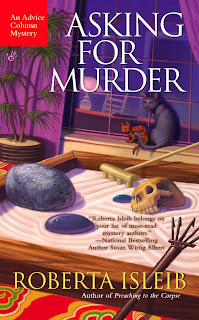 I love to read, and read every night to my hub's dismay as he'd like me to watch movies with him :). I read for story and character, not the puzzle or the "how did she do that?" So if I want to figure something out, I have to go back and read it a second time. But I definitely notice subpar writing...

Paris, Paris, and Paris! I'd love to live there for a month and explore every nook and cranny. In fact, I did have a month there during my junior year in college, but I was too darned homesick to enjoy it!

I was in the Domincan Republic, doing research for a book that was never published. (I know, I know, hard life...) I convinced my husband to take photos of the police station in La Romana. A uniformed man with a big gun came running toward us yelling in Spanish. We hightailed it out of there, let me tell you. I'd never make it as a detective in real life! A big chicken...

~~~
Thanks, Roberta! Best of luck with Asking for Murder. I'll be back later in the week, plus a return to the Debs on Friday to celebrate Gail Konop-Baker's amazing debut, Cancer is a Bitch.
Posted by Jess Riley at 11:11 PM