This is going to be a fairly random post, because I'm busy fretting over three things: 1) we have bird families* nesting in our house / hanging baskets on the porch and major remodeling is imminent; 2) I have to finish my final grant for the season by next week and it's nowhere near ready for prime time; and, 3) I need to come up with a new beginning, a new ending, and some other brand new scenes for Riding with Larry and return the whole shebang to my editor by August first. I wish I could just say, "Creativity, Activate!" and start channeling brilliance, but unfortunately, lately I'm feeling as clever as a tomato plant. (See what I mean? That was the best analogy I could think of. I looked out the window, saw my tomato plants, and thought, Hey! They're not so clever. Use them! Stupid tomatoes. Hehe.)

So on with the randomness. First, the other night as I left work I caught myself saying to a coworker, "We'll see you tomorrow!" And it gave me pause. "We'll?" Am I now speaking for two people? Could I BE any more Wisconsin-ey? I've become a plural! Recently I saw a program on the Discovery Channel called Vanished Twins, about how one fetus absorbs its twin in utero, and the absorbed one becomes a parasite living off of the other. So, technically, I could be speaking for me and the parasitic twin I absorbed in my mother's womb when I say "We'll."

Oh my god that last sentence has effectively kicked my appetite into next week. My ovaries just slammed the door shut and flipped over the "Gone Out of Business" sign.

This week I had a few Googlers end up on my site via the following searches: "Little Debbie Look-Alike Contest," "Wal Mart Put the Wrong Oil in my Car," "Christian Bale Look Alike," "Larry Resnick Furniture," and "Funny Things that Have Happened in Chinese Restaurants." From these searches I can deduce that the first individual may be a stage mother; the second was likely furious, the third may have been horny, the fourth was looking for a good deal on a sofa, and the fifth person was bored and someone I might like to have lunch with at China King.

And guess what else? I finally joined the rest of you in the twenty-first century. I bought a cell phone! Let the paranoia about radiation near my head commence! Last night we saw The DaVinci Code and before the movie started a public-service announcement scrolled across the screen: "Please Turn Your Cell Phones Off!" And I got all warm and fuzzy, thinking, They're finally talking to me, too! I'm part of the club! But my fellow movie-goers had no reason to worry; I'm still working up the courage to turn my phone on and actually ... leave it on.

Finally, here are two more album covers to take you through the long holiday weekend. 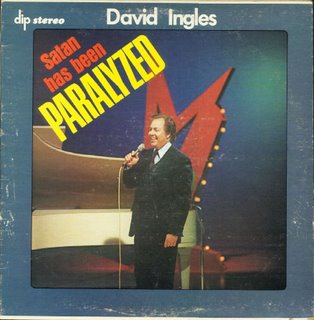 And now lives in an assisted living facility in eastern Texas! Something tells me that if I listened to this album, I'd wish that my auditory ossicles and inner ear cochlea were paralyzed so they could not transmit the sound of Mr. Ingles's voice to my brain. 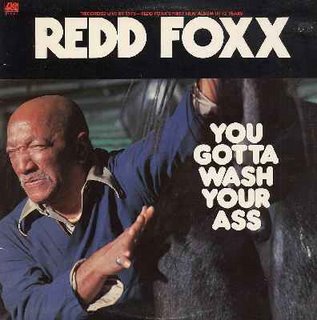 Thanks for the reminder, Redd! I think I should tape this picture to my computer screen to remind me during marathon blogging episodes that there is a magical invention on the second floor of my house. It is called a shower. And I should step into it at least every other day to wash. Just my ass, though. Any more than that would be excessive.

Have fun "frying out" this weekend. See, that's what they call "grilling out" in southeastern Wisconsin. But there's no vat of hot oil, no Fry Daddy in sight. Only a smoking grill piled with hamburgers and bratwurst. Makes no sense, does it? But if you drive anywhere around here on a weekend, you'll see signs along the highway advertising local "Brat Fry" fundraisers. If you're an out of state visitor passing through on a roadtrip with your kids and they won't stop kicking your seat, you can tell them that in Wisconsin, naughty children are burned at the stake and the whole town comes out to watch these Brats Fry. Try it! You won't hear a single "Are we there yet?" again until Wall Drug.

*Chickadee update: remember how on Sunday I plugged the hole in our house I thought the chickadees were building a nest in? And how I felt so awful at their distress that I unplugged it? Well it's a damned good thing I did! Because guess what. There were babies in that hole, and they fledged onto the lawn this morning. There are five healthy little black and white fluffballs. Mom and Dad chickadee are feeding the babies right outside my window as I write this. Unfortunately, J has his camera at work, so if they're still there this evening, I'll post a picture. Damn they're cute.

Update, Friday morning: I'm very sad to report that we had a heavy, cold rainfall last night, and none of the chickadees made it. I'm hopeful that mom and dad will still have time to hatch one more brood before summer's over.

Update again, Monday afternoon: The chickadee parents are building another nest in our wall. Fingers crossed for those cute little buggers.