Egads! Where did the summer go!? The bumblebees are already sluggish and there are sweaters exploding from stores at the Outlet Mall. (Yes, I finally mustered up the ambition to cross the highway to go there. But only so I could blog about it in passing.) 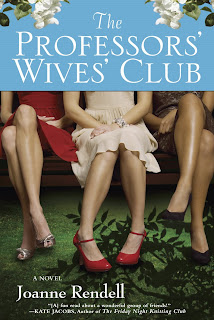 Since I don't have to return to work for a few weeks, I have been blissfully lost in some fabulous late-summer books. A few recent reads: The Wishbones by Tom Perrotta (a tightly-written, insightful, and damn funny book about a wedding band), inside out girl by Tish Cohen (Deb from the class of 2007, and a Target Break-Out book...an adorable, heart-warming story about a special young girl), and The Godmother by Carrie Adams (another Target pick). I'm only halfway through this one, but I love Ms. Adams' British wit and will be hunkering down with the rest of it this rainy afternoon. And because I love to plan ahead, my next batch of reading material just arrived in the mail: All We Ever Wanted Was Everything by Janelle Brown, and The Professors' Wives Club, by Joanne Rendell.


After months of emailing back and forth ("My cover has feet on it, too!" "I'm working with that web developer, too!" "I'm kind of freaking out, too!"), I was thrilled to finally meet Jo Rendell face-to-face in San Francisco this July, and she is just 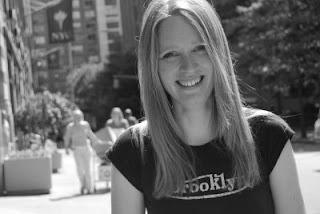 as gorgeous as her photo. And she's such a sweetheart, with the loveliest British accent! I'm thinking of asking her to record my outgoing voicemail message. Or I may just adopt her. So I'm delighted that the newest GCC tour is for her debut novel, The Professors' Wives Club (NAL/Penguin; 2nd September 2008), which features four professors’ wives who risk everything to save a beloved faculty garden.


Kate Jacobs, New York Times-bestselling author of The Friday Night Knitting Club, had this to say about the book: "As an NYU alum, I enjoyed the behind-the-scenes escapades at the fictional Manhattan U. in THE PROFESSORS’ WIVES’ CLUB. Joanne Rendell has created a quick, fun read about a wonderful group of friends."


And Christina Baker Cline, author of The Way Life Should Be, said: "The four women in THE PROFESSORS’ WIVES' CLUB who risk it all in pursuit of life, love, and green space in New York City are smart, funny and real -- friends you'd want for life. Rendell doesn't shy away from tough issues, but her light touch and readable prose make this charming first novel a delight."


And by now, you know the drill. Commence with the interrogation!


1) Now that you are published, what (if anything) have you changed about your writing routine?


Procrastination features much more heavily in my writing routine these days, unfortunately. You would think that once you become a published writer you would be spurred on to keep writing and to keep on task. Alas, no. At least, not in my case. In the current climate, with book sales on the demise and author’s being expected to do the lion’s share of book promotion, authors must spend a lot of time networking online, blogging, guest blogging etc etc. Which means it’s so easy – at least for someone weak-willed like me – to get sucked into the vortex of the internet while precious writing time goes swirling down the toilet.


2) Do you listen to music while you write?


No. I’m one of those people who find it distracting. Ironically, I don’t find the honking Manhattan traffic right outside my window distracting at all. I’ve come to consider the wail of fire trucks, the blare of cab horns, and the vibrations of passing buses almost melodic.


3) Have you found that as you've developed your writing and story telling skills, you watch movies or read books 'differently?'


I’ve gone through a couple of transitions as a reader. As a kid and a teenager, I read books purely for their content; in other words, for the stories they told. Then I went on to study English Literature at college – eventually getting myself a PhD in the subject – and as a reader I came fascinated in more philosophical and critical questions about the books I read. Why have certain stories come to be told and published? How does a novel reflect or rethink the culture in which it was written? How do certain novels speak in conversation with other works of literature? I’m still interested in these questions, just as I still read for the sheer joy of the story. But now I also read as writer too. I love looking out for tricks I can steal! For example, I watch how authors transition from scene to scene, or how they use dialogue to shift pace and tone, or how they use flashback and exposition. When I am writing, I have to be in the middle of a novel too. I believe being a big reader is the only way to being a big writer.


4) What vacation would be most inspiring to you as a writer?


My family and I own a tiny ramshackle cabin in upstate New York. We can only use it in the summer months because it isn’t winterized and even then, if there’s a storm, you can often feel raindrops on your head in the bathroom! It’s kind of like camping out in a leaky wooden tent. In spite of its “rustic charms,” however, the place had been wonderful for my writing and concentration. There are trees and birds and flowers – all things I don’t see much in Manhattan and which all seem good for a writer’s soul. Most importantly, though, there’s no phone and no internet and thus I can’t slip into “I-must-snoop-at-friends-photo-albums-on-Facebook” mode whenever I’m at a tricky point in my writing. I wrote half of my second book (which comes out next summer) while at the cabin. So, in answer to your question, a trip to our little shack would probably the most inspiring vacation I could ask for.


5) What is one of your strangest / most quirky author experiences?


Making a whole bunch of friends that I have never met face-to-face. I am a member of various online writers groups and, I have to say, I have never experienced the isolated-writer syndrome that so many people speak of. The exact opposite, in fact. Since I started writing fiction, I’ve never felt like I have so many like minded and supportive friends. I’ve never met many of these people in person, but it doesn’t matter. If I’m struggling with a scene, I can shoot an email off to a friend and say, “Argh, don’t you hate it when…?” And usually, because they're a writer who constantly checks email like I do, they’ll email right back and say, “Yeah, I hate that too.”


A writer who constantly checks email...hmmm, I can't relate to that at all! Thanks so much Jo...best of luck with the release, and I can't wait to read it!!!
Posted by Jess Riley at 10:00 AM