Well I certainly have taken my sweet time to update, haven't I? Here's what's been going on. First, I got the hare-brained idea into my head that we should move. To a house 45 minutes from our jobs. With the price of gas projected to keep rising, it only made sense to increase our daily commutes, right? Also, since we may want to have children in a few years (that's a MAYBE Mom and Dad!), it seemed appropriate to investigate new housing situated right on the banks of a fast-moving and potentially dangerous river popular with canoe enthusiasts.

Luckily, reason prevailed and I decided we should stay in our hovel a bit longer so we could save money. I know, it's like I slipped on a patch of wet pavement and hit my head! So we're looking at a few more years of old-timey fist-shaking when the neighbor kid screeches around our corner at 55 miles an hour blasting Lupe Fiasco.

Also, tonight I spent about eighty bajillion hours updating our investment portfolios. Because I recently learned that we've been on the Howdy Doody plan. Meaning, my head was filled with sawdust when I first set up our retirement accounts. There I was, tra-lah-lahing around in the baby pony fund when I should have been in the rabid badger fund for the last few years. Who knew?!?! Anyway, I now know more about mutual funds than I really care to. I've probably lost a dear childhood memory so my brain could clear up some space to stuff the new financial crap in. Great.

Here's another new development / bad habit I've instilled. My dog Daisy likes to wake me up in the middle of the night when the mood strikes her. Sometimes it’s to let her out to go potty, and sometimes, even though she has these meaty little hind legs that could help her clear tall buildings in a single bound, she wants me get up out of bed in order to reach down and lift Her Laziness up onto the bed. Which is a situation that would probably lead Cesar Millan to bludgeon me with a Garden Weasel.

Last night around 4 a.m. I heard her tiny harumpffh whine from the floor near the bed; sort of a whiny “Hey!” I’d been dreaming about meeting a client, only she looked nothing like herself and instead looked like the hideous computerized age-progression of a kid I’d seen hours earlier on an episode of Honey, We’re Killing the Kids! Confused in the wee hours of the morning, it took me a second to figure out what I was hearing.

And there it was again. The teeny, whiny “Hey!” I tried ignoring her, but the “Heys!” grew more insistent. Reluctantly, I slid out of bed. She dashed away. I thought I’d frightened her, so I followed her around the bed, where she crawled under the night stand. I retreated, but she dashed out to follow me. I bent over to pick her up, and she scampered away again, her blonde hair glowing in the dark.

I gave up, but there she was again; this time in full play-bow position, tail wagging.

She’d woken me up at 4 in the morning ... to play tag. When I turned around to climb back into bed, she was already curled up in my spot, grinning.

I slid in next to her and lay there uncomfortably for the next two hours composing blog entries in my head. When I got to the part where I would have written, “Miraculously, J slept through it all soundlessly” a snore exploded near my left ear.

But while I lay there staring at the ceiling I did get a chance to think of some products that could Make my Life Easier and Trigger the Premature Mailing of my AARP Card. Notably, the blanket lifter. For some reason, at five in the morning, this seemed like a fantastic idea. I was all, My feet have been crushed for too long under the tyranny of heavy blankets! The time has come to free the toes! The more I thought about it, the more my duvet felt like a softish pile of Stalins mercilessly oppressing my little piggies, and the better the idea of the blanket lifter became. I was mere seconds from rising from bed again to order what was by then the best invention EVER. Better even than the wheel, or the microchip, or salad bar sneeze guards, or jeans with just a hint of stretch in the waist.

Then luckily, I fell asleep. 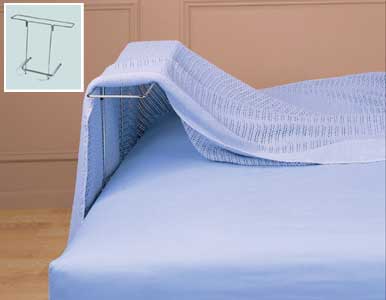